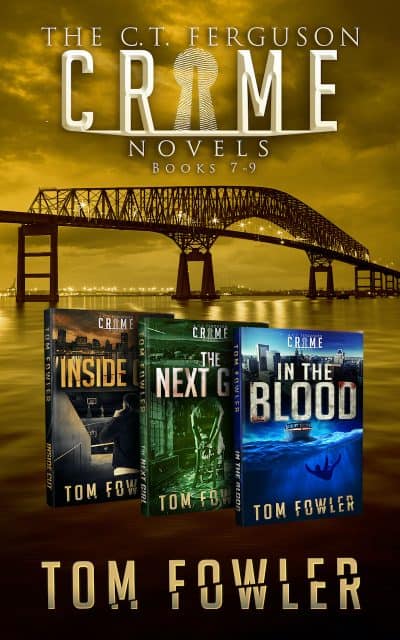 Three standalone crime thrillers in one volume! Baltimore PI C.T. Ferguson hunts the city’s worst criminals. He’ll help an overwhelmed basketball star and search for a vicious killer. Then, a couple bullets have his name etched on them . . .

All the while, an unexpected enemy bides his time . . .

C.T. is a smart and established private investigator, but even he can’t anticipate every enemy.

Inside Cut
College hoops star Calvin Murray leads his team into the tournament. His mother hired C.T. because she fears her son has fallen in with the wrong people.

She’s right. But the problem goes way beyond basketball, and it just might swallow up Calvin and C.T. both.

Then the missing girls start turning up dead. Ashleigh wasn’t the first to go missing.

And she won’t be the last.

In the Blood
C.T. is shot and left for dead. Will he live to solve his own attempted murder?

The crime leaves two big questions. Who did it? And why?

The answers will shake the Ferguson family to its foundation.

If you like gripping mysteries, snappy dialogue, and cyber intrigue, you’ll love this collection of three C.T. Ferguson crime novels.