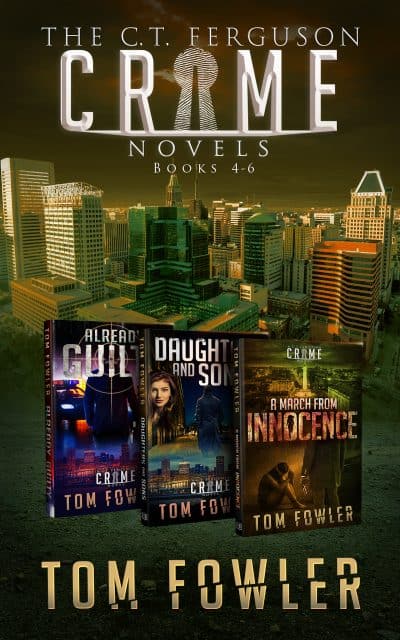 In this trio of crime thrillers, Baltimore private investigator C.T. Ferguson faces his most personally and professionally challenging cases. From corrupt cops to power brokers to the Internet’s worst criminals, C.T. takes them all on to bring justice to his city.

A hacker turned PI delivers justice to a desperate city.

This omnibus collects books 4-6 of the gripping C.T. Ferguson crime novels: Already Guilty, Daughters and Sons, and A March from Innocence.

Though he started out as a reluctant detective, C.T. has grown into the job. He almost likes it. These three cases challenge him both personally and professionally in ways he never expected.

Already Guilty (#4)
C.T. is helping his cousin Rich celebrate a birthday when the news comes in: officer down. The police quickly arrest a suspect. They’re convinced they have the right person in custody.

C.T. isn’t. And it might cost him his improved relationship with Rich, not to mention his life, to prove it.

Daughters and Sons (#5)
C.T. already has a case when he gets devastating personal news, leaving him shattered.

He soon burns the candle at both ends. If C.T. is good enough and smart enough, he’ll get justice for the living and the dead. If he’s not, he won’t live to see his upcoming thirtieth birthday.

A March from Innocence (#6)
A missing girl puts C.T. on a collision course with people who live in the Internet’s darkest corners.

The system designed to protect girls like Libby Parsons let her down. C.T. searches for her from the worst areas of Baltimore to the most rural parts of Maryland. Can C.T. take down the people responsible before any more lives are ruined—including his?

If you like gripping mysteries, snappy dialogue, and cyber intrigue, you’ll love this collection of three C.T. Ferguson crime novels.