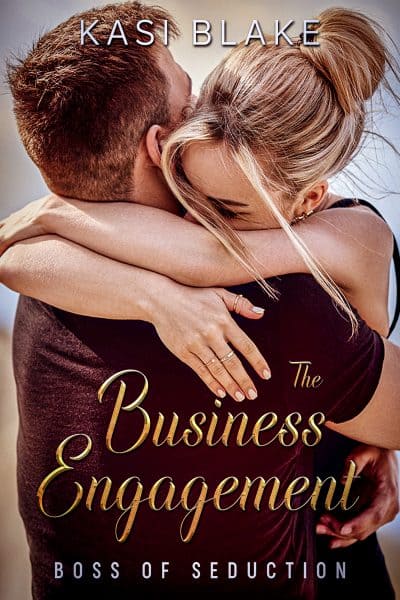 The Business Engagement (Boss of Seduction)

One fake engagement can save two people . . . if they can keep their hands off each other.

When claustrophobic Anna gets trapped in an elevator with hunky Skylar, the last thing she expects is to emerge an engaged woman. But Skylar insists it will stop tongues from wagging if their coworkers think she’s marrying him and not sleeping with her boss.

After receiving a well-earned promotion, Anna opens her office door to find a condom bouquet with a nasty note attached. At least one of her colleagues assumed she got the promotion by sleeping with the boss. Now she doesn’t know if she can continue working at the law firm.

Skylar goes straight to his office to pack his personal items. He’s done working for his father, and nothing is going to stop him from quitting this time. What’s the point in staying? The old man has made up his mind that Skylar is nothing more than a gambling womanizer.

When they get stuck in an elevator, Skylar comes up with a brilliant plan to save them both. What if they pretend they’ve been a couple for over a year? His family will get off his back about changing into who they think he should be, and Anna’s colleagues will know she didn’t sleep with his father. He assures he can convince everyone that she earned her new position through hard work. After all, she could have used her engagement to him to further her career but chose not to.

Now, if they can just keep their hands off each other and focus on fooling his family and their colleagues, it just might work.