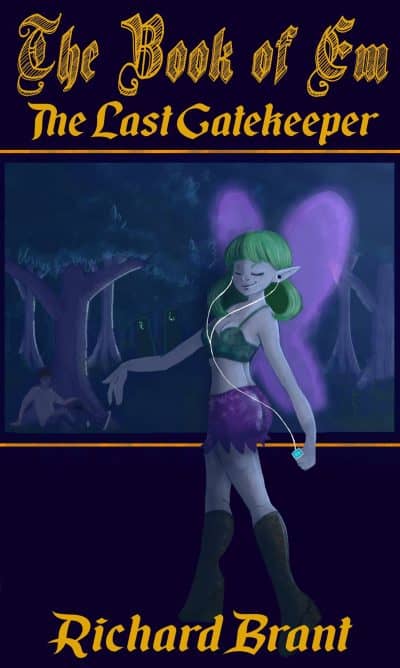 The Last Gatekeeper (The Book of Em Book 1)

In an Ancient land, mythical creatures roam. Ben’s life was about to change. She danced in the clearing, looking like a escapee from the nut house. He shouldn’t have run. He never saw the tree. When he woke, deep in the magical world of EM, his adventures began.

Who will keep the world of EM safe?

Ben’s life was about to change, but not how he imagined it might. At 15-years old, without any friends, his mother moved them to a strange old house she inherited. It was there that he saw the half-fairy for the first time.

She danced in the meadow.

He shouldn’t have run. Ben was too deep in the woods. It was dark and he never saw the tree. When he awoke, deep in a place they called EM, his adventure was about to begin.

Was this his destiny?

In the company of an exiled Dwarf, a Fawn, a Satyr with performance issues, a Goblin imp and a rhyming Bridge Troll, the two teens embark on a series of adventures unlike anything you’ve ever seen before.

Could he trust this strange girl named Cree?

You’ll love this epic fantasy because the twists are clever and the humor a delight. It will keep you turning the pages.