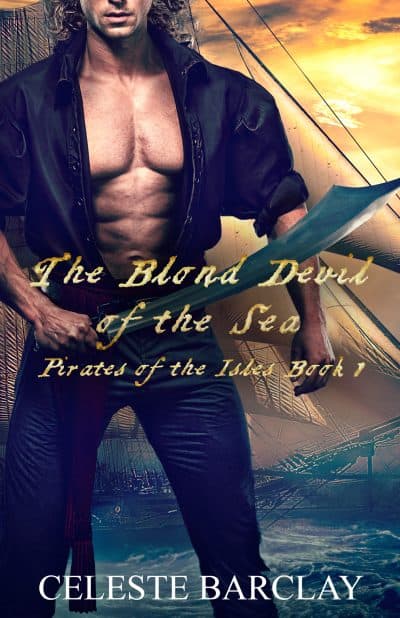 The Blond Devil of the Sea: A Steamy Enemies to Lovers Pirate Romance (Pirates of the Isles Book 1)

What happens when a lady smuggler meets a ruthless pirate? What happens when a pirate captain tries to tame a fearless woman he mistakes for a lad? While Rowan likes Caragh’s spirit, his palm itches to lay down the law with the woman who invaded his cabin and his life.

What happens when a lady smuggler meets a ruthless pirate?
Caragh Pedrick is used to men on the wrong side of the law since she runs her Cornish village’s smuggling ring. Fishing no longer feeds their families in her coastal village, so she puts her resourcefulness and bravery to use. But she’s unprepared for the pirate captain who captures her during a raid. Whisked away on a pirate ship, Caragh soon discovers that her pirate captain’s form of command is anything but unsavory. Tempted by his piercing blue eyes and powerful manner, Caragh finds herself giving in to the Blond Devil. Can Caragh leave her smuggler’s life behind for life on the high seas?

What happens when a pirate captain tries to tame the fearless woman he mistakes for a lad?
Rowan MacNeill was forced from his home on the island of Barra and into a life of piracy. Now the captain of his own ship, Rowan expects obedience from the minx he unwittingly captures. When he raids the quiet village of Bedruthen Steps, Rowan decides Caragh, dressed as a lad, would make a fine cabin boy, but it’s not long before Rowan discovers the curves that lay beneath her disguise. While he likes her spirit, his palm itches to lay down the law with the woman who’s invaded his cabin and his life. The question is: will she give in to the Blond Devil?

When misunderstanding and distrust threaten his burgeoning relationship, Rowan must put his faith in his lady smuggler. With a choice to make, Caragh must decide if she can forgive her pirate lover and make a new life with him. Can Rowan put his painful past behind him to save his burgeoning relationship? Can she curb her independent spirit in exchange for an adventurous new love?

Pirates of the Isles is a STEAMY series where lust and love become tangled when pirates and their ladies toe the line between pain and pleasure. Travel to the Hebrides and the coast of Scotland as these pirates pillage and plunder not only villages and ships but the women fearless enough to take them on. Each book can be read as a standalone, but many characters appear throughout the series.
This passionate love story is ready to go up in flames. It contains adult scenes with explicit content. If this type of material offends you, please do not download.