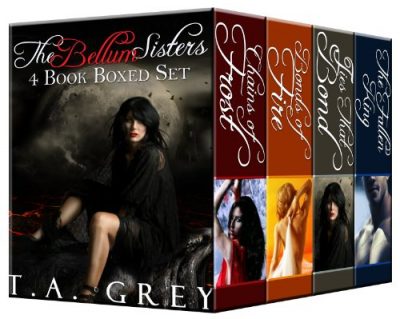 Three Fates. Three Sisters. Succubus sisters meet their new Protectors whether they want to or not: the vampire commander, Tyrian en Kulev; the alpha shapeshifter, Lyonis Keelan; and the demon warlord, Telal Demuzi!

The Bellum sisters are endowed with magical and seductive qualities as succubus creatures and although they’ve lived independently for their entire lives, all that is about to change as they reach their 29th birthday. At a succubus’ 29th year, she no longer needs food to sustain herself, she needs sex.

Their father has died, and in his wake he has bequeathed his daughters into the ownership of new Protectors: the vampire commander, Tyrian en Kulev; the alpha shapeshifter, Lyonis Keelan; and the demon warlord, Telal Demuzi. The sisters will fight ancient demons the size of mountains while battling their hearts, casting a few bad spells, cursing bloody murder, making bad jokes, and cozying up to a hard male body.