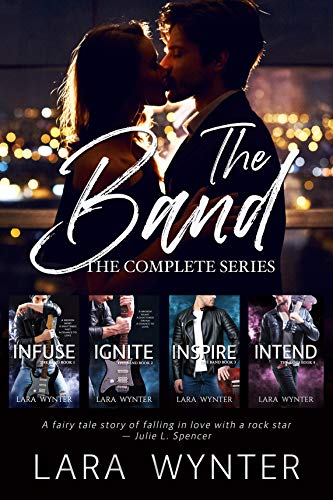 The Band (The Complete Series)

Infuse
Autumn is not your average twenty-one year old. She often has trouble just leaving her house. The anxiety is like a curse, threatening to pull her under at any time. She uses music to help her cope. The music that helps the most is by one of the worlds top bands—Infusion Deep.

As lead singer of Infusion Deep, Finn should be on top of the world. His band is one of the hottest on the planet. But for the last two years, he hasn’t been able to write a thing. The band is depending on him, but inside he feels broken and alone.

Can a chance meeting help them to heal? Or will their problems lead them both to heartbreak?

Ignite
I am a fraud. People think I have it all together. I have fame, money, and millions of adoring fans. How can I still feel so alone?

Wes Bowman, founding member of world famous rock band Infusion Deep, has never felt lower. His little sister Sophie is safe under his care. His best friend is now happily married. Wes has spent his whole life fixing other people’s problems. He doesn’t have time for a relationship of his own.

When Jemma Jones is offered a job as Sophie’s nanny, it’s exactly the opportunity she needs. Left horribly scarred by her ex boyfriend, she has to get her life back on track. Wanting to avoid the spotlight, she is relieved when the job means staying at Wes’s Portland mansion and not touring with the band. What she doesn’t expect is to discover herself falling for the gorgeous rock star.

Two hearts not looking for love. But is love just what they need?

Inspire
Sophie Bowman just wanted to celebrate her newfound independence with her best friend, Anna. What could be more fun than a girls night in Vegas?

When Sophie wakes up in Vegas, married to rock star Hunter Hawke, she panics. Having grown up with a famous brother, she wants to make it in the music business on her own. She won’t ride on either her brother’s or Hunter’s success. So, even though she finds herself irresistibly drawn to him, she’ll cut the ties that bind her to Hunter as soon as possible.

Tired of groupies and sycophants, Hunter falls head over heels for the musician whose talent burns as brightly as his own. After their impetuous marriage and Sophie’s subsequent rejection of him, Hunter is terrified to tell her that his feelings for her are real. With his checkered past, does he really deserve someone like Sophie?

When disaster strikes, more than just their feelings will hang in the balance.

When Misty Reynolds stumbles in the street, she is rescued by a handsome stranger. He seems too good to be true and Misty knows life is never easy. Forced onto the streets, she can’t let him into her messed-up life.

Unlucky in love, Ryan Deveau is shocked when the most beautiful woman literally falls into his arms. He is immediately captivated. But when Misty discovers he is the bass player in a world-famous rock band, Infusion Deep, she runs.