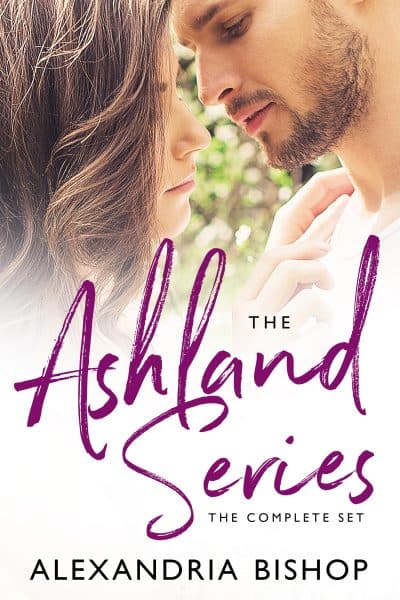 A complete box set: Budding rock stars find love and second chances with the women of their dreams in this must-read collection of unforgettable romances. “I officially have a new book boyfriend crush!” (New York Times bestselling author Carey Heywood on Freeing Jude).

A bundle of four books in the Ashland series, Finding Flynn, Falling for Hudson, Freeing Jude, and Fighting for Jax.

Finding Flynn
When the drama in your life is crazier than fiction, anyone would want to escape.

Bookworm Ashtyn is fed up with the immature rich boys who fill her high school. Her parents’ marriage is on self-destruct mode. And her sister puts on a facade of perfection.

Now her mom is running away and dragging Ashtyn with her. Finding herself in the middle of nowhere right before her senior year, she has no qualms about turning anything around.

A distraction is just what the doctor ordered, and he comes in a tall, dark, and tattooed rocker package. At night, Flynn slings drinks as a bartender. During the day, the success of his band is the only thing on his mind.

Neither was looking for love, but they can’t deny their sizzling attraction. As the summer heats up so does their relationship, but will a secret that Flynn is keeping be enough to tear them apart or is their connection strong enough to withstand anything?

Falling for Hudson
What would you do if you suddenly lost your parents?

Becoming an orphan right before her senior year is not something Chloe had on her agenda. Neither was moving away from the only home she’s ever known. Rather than dealing with her grief she drowns her sorrows in a liquor-induced haze and relies heavily on Hudson. The only person who truly has her happiness in mind.

With his band starting to take off the only thing missing from Hudson’s life is someone to share it with. Lost in an internal battle between being the friend Chloe needs and the boyfriend she wants his resolve soon weakens when they find themselves locked in their school’s auditorium for a long weekend.

When these friends decide to finally become lovers, could a misunderstanding break their already unstable foundation? Or will they persevere and be exactly what the other needs?

Freeing Jude
What happens in the past never truly stays there.

Abbie dreams of an Olympic gold medal came crashing to the ground as a result of a former taboo relationship with her coach. With a fresh start, her thoughts are no longer consumed by gymnastics and the future she’ll never have.

Recently emancipated and freed from his past, Jude is finally going after his dreams, and nothing is standing in his way. Marlowe, the pop-punk band he’s in is taking off and now he’s determined to get the girl.

A major event will change not only their lives but the small town they live in forever. Are Abbie and Jude strong enough to make it through and be free of their demons? Or will the weight of it all be their undoing?

Fighting for Jax
What would you do for a second shot at true love?

When she was 17, Erin made a decision that would forever change everything. With fierce determination and hard work, she’s found success but at the price of her happiness. Four years later, Erin has an opportunity to right the wrongs of her past and help the one person she’s never stopped loving.

Jax embraces his new rock star lifestyle. Women. Booze. Drugs. When he’s given an ultimatum by his bandmates to clean up or leave the band, Jax agrees to accept help from the one person who has the ability to break him. Again.

When Erin and Jax return to her family’s ranch in Texas they’re forced to face the ghosts of their past and decide if the time apart has changed the love they once shared. They must answer a question that neither is prepared to face – Can your first love remain your true love?

Together they’re given a second chance. At life. At love. At everything.