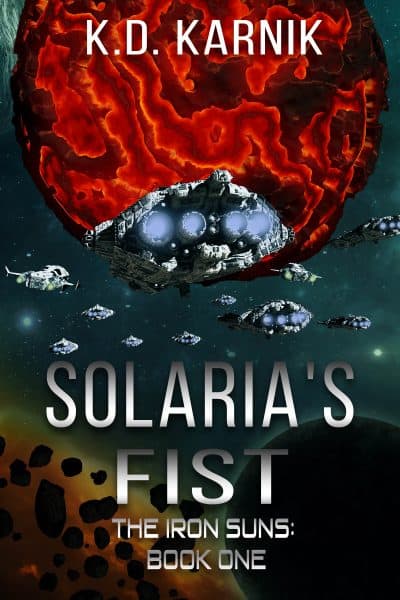 Arise. Awake. Betray. When the war comes, rejoice. Smuggled radios scream such mottos at the Thousand Suns, the navies of Solaria find themselves on the edge, scattered and fighting a lost battle, traitors plaguing high command. One way or another, reckoning is near …

Smuggled radios scream such mottos at the Thousand Suns, as the navies of Solaria find themselves on the edge, scattered and fighting a lost battle. The battle to preserve what the war against the Tauran Empire ripped clean off humanity, and Solaria’s decadent order.

Technologies banned for centuries are popping up on burnt worlds, military laws in several sectors turn into an afterthought. Eons of “peaceful oppression” end at the hands of an invigorated underground, tension amongst upstart superpowers teeter on the brink of war, and the Sun calls upon its workers to fight the Spacer Melds, forsaking a billion lives and counting.

Shiv Aggarwal, named most popular warrior of the colonial admiralty on Earth, appears to wallow in postwar depression. It makes for a good mask, as he works, collects, observes, as a traitor in the midst of Solaria. But when a war leader’s assassination plunges the fleets into frenzied mobilization, and he is sent into an escalating military situation at the Blackwaters with enough firepower to pulverize a planet, he can think of enough Divinity-approved ways to use it for his own planned crusade.

When an enemy messenger pops up to claim the existence of a new threat that “might” be unstoppable if humanity does not unite and prepare for a war of annihilation, doubts spring up. With doubts come more heat between allies, while the possibilities are far too dire to ignore. Guided by To Shiv, it is a matter to rejoice. He volunteers to head into the unknown, confident the enemy is a godsend method to weaken Solaria before he strikes his own blow. As his universe falls apart, he prepares. Before he can save humanity, he must cleanse it.