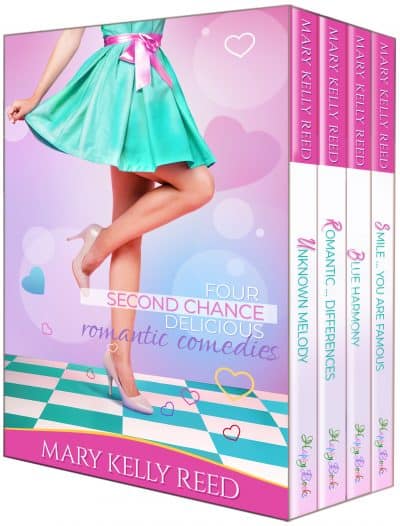 Four original and delightful, second-chance romantic comedies, with over 270 reviews on the individual books!

Smile—You Are Famous
Taking revenge may lead to strange paths . . . Not only did Laura’s ex create a comic based on her, but he also depicted her as stingy. It’s payback time and Laura can be pretty inventive as well.

My name is Laura and I’ve always led a life free of surprises, which suits me perfectly. Imagine my bewilderment when, a few weeks before my wedding, I discover that everyone is identifying me with Daphne, a comic series heroine.
At first, I smile at the whims of the universe, but my smile fades away when I realize that Daphne and I are so alike because she was created by David, my ex-fiancé.

If only he’d portrayed me as a superb, intelligent creature . . .  No, Daphne has to be depicted as stingy. Ever since then, I’ve only had one thing on my mind: to get revenge on him; and believe me, I have quite an imagination. And for those of you who are wondering . . .  no, I’m not stingy. What do you mean you don’t believe me?

Blue Harmony
Amy flies to Santorini to confront her ex. What could possibly go wrong? A fun and flirty romantic comedy with witty dialogues and full of surprises.

Amy is tired of sabotaging all of her relationships because of Ethan. He broke her heart years ago, and she let him get away unscathed. It’s time for her to confront him and rewrite the past.

Determined to set things right, she flies away with her friends for the blue skies of Santorini to carry out her plan; a plan that begins to collapse as soon as she crosses Ethan’s gaze.

Surprise guests and an idyllic romantic setting will further complicate her designs. Is she right to insist, or will stirring up the past prove to be a dangerous game?

When Kylie’s script about her story with Adam, her ex, is made into a film, and Adam becomes the director, the fireworks begin and sparks fly. Fun and witty.

My name is Kylie, and I’m about to embark on a unique adventure. This summer, I’m going to attend the filming of my first screenplay. For weeks I’ve dreamt of meeting famous actors, parading in gorgeous outfits  . . . only to learn my dream will be short-lived. I’d forgotten I could always count on Adam to shatter my dreams. Not only did he leave me seven years ago, but he has now reappeared as the director of my film, complete with one of the most up and coming actresses in the industry hanging on his arm.

Mandy, my best friend, claims that this is some sort of poetic justice. I should have never written our story and, what’s more, given him the role of the bad guy. If Adam thinks I won’t get the final word though, he’s sorely mistaken. I have more than one trick up my sleeve to thwart his plans, starting with refusing to let his darling play my heroine.

Unknown Melody
When Christine runs into Logan, she doesn’t remember ever having met him, let alone being in a relationship with him. Or does she?

Christine met Logan years ago while he was staying at the hotel where she worked. After spending a few dream days together, he disappeared without giving the slightest sign of life. So when their paths cross again, she decides to take her revenge in a rather original way.

In what way? Simply claiming she doesn’t remember meeting him. But Logan is determined to make her recover her memory, and his methods are rather irresistible. Well, that’s what Christine lets him think, because his charm doesn’t have any effect on her, does it?

Except that the truth is perhaps quite different, and with her brother, Alex, ready to reveal her dupery, it’s in her interest to carry out her plan as soon as possible.