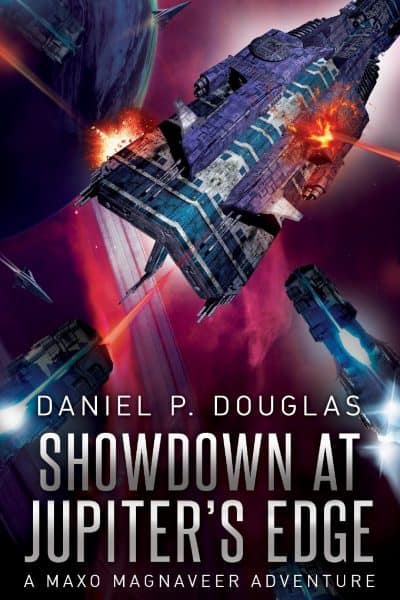 Space cop Maxo Magnaveer, desperate for a major career boost, takes a wild left turn at Mercury to pursue a greedy pirate, Colonel Zaza D’Rump, setting himself onto a collision course with destiny! Will he succeed? Find out in this heroic and action-packed space opera!

Sometimes the greatest fight is to discover ourselves . . .

In the year 2247, Detectant Maxo Magnaveer yearns for an opportunity to prove himself in the Cosmic Law Force so he can be promoted to squad captain. When a greedy privateer, Colonel Zaza D’Rump, brazenly hijacks a shipment of synthetic foods on its way to Mars with plans to starve the colony to death unless he is given control of Earth’s shipping lanes, Maxo sees his opportunity to rise above, save the day, and finally move up in rank and prestige.

Fooled by those he thought were allies, Maxo stumbles on the slippery edge of failure more than once as he races to what could be a catastrophic battle above Jupiter near D’Rump’s secret base, Porto Blago.

With his career and so many lives at stake, Maxo gains the help of old and new friends, and begins to realize his quest may not be about proving himself to anyone, but about discovering himself and rising to his true purpose in the universe.

First, however, he’ll have to survive the showdown at Jupiter’s Edge in this heroic, humorous, and action-filled space opera.