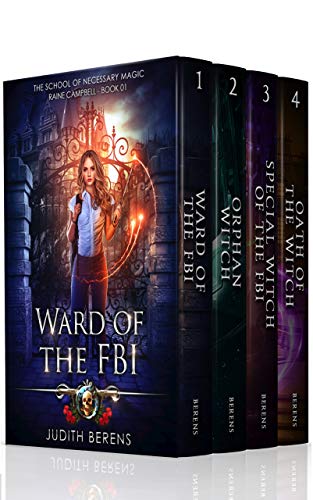 During a forbidden trip into the underground city beneath the school—off limits to freshman—Raine discovers druids are disappearing. And no one seems to care. Raine dives into a dangerous plot to rescue them before the balance the druids maintain tips into chaos. Over 180 reviews on the individual books!

Heroes aren’t born; they’re made. But so are villains.

Raine Campbell never knew she was special until her dormant magic unleashed to protect her friends.

But it couldn’t be contained or controlled.

Enter the School of Necessary Magic, where magical teens are taught to master their abilities and maybe learn some math.

During a forbidden trip into the massive underground city beneath the school—off limits to freshman—Raine discovers druids are disappearing. And no one seems to care.

Refusing to stand by and ignore it like everyone else, she dives into an increasingly dangerous plot to rescue them before the balance the druids maintain tips into chaos.

But doing so requires breaking rules that could lead to her expulsion and threatens to end her dream of working as a witch for the FBI, following in the footsteps of her father and uncle.

Join Raine on an action-packed adventure of magic and mayhem.

After all, rules are just guidelines, right?

Say hello to old friends and meet the new freshmen class at the School of Necessary Magic.

This boxed set includes the first four books in the series: Ward of the FBI, Orphan Witch, Special Witch of the FBI, and Oath of the Witch.

NOTE: While the series continues in the same world with some returning characters, it does stand alone. No prior experience necessary.