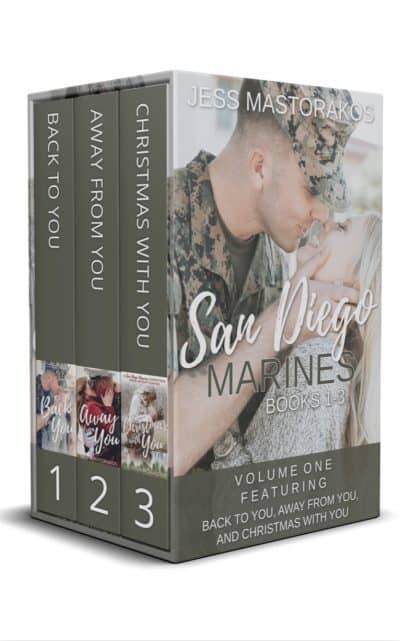 Fall in love with Hawk, Mills, and Cooper in the first three full-length books in the San Diego Marines series. Inside, you’ll find friends-to-more, second chances, and a holiday fake relationship.

Back to You
He’s ready to protect his country, but protecting his heart is a little more complicated.

United States Marine Spencer Hawkins doesn’t do relationships. Not even with his best friend Ellie Burton, the girl who has always been there for him, even in his darkest hour. As he starts his journey as a new Marine, Ellie doesn’t hesitate to support his dream, even if she’s struggling to find her own. But after one kiss changes their relationship forever, can they ever go back to just being friends?

Away from You
This kind of love deserves a second chance.

Lance Corporal Matthew Mills leaves his wife after returning home from his first deployment with PTSD. Six months later, a week in the woods at Big Bear Lake promises relaxation and fun with friends. Without the pressures of the outside world, Olivia hopes she can convince him that their love is worth fighting for. And as much as it scares him, Matt can’t help but want to let her.

Christmas with You
Fake-dating a gorgeous Marine at Christmas should be a no-brainer for Angie. Too bad he drives her nuts.

When Staff Sergeant Charles Cooper made up a fake girlfriend to appease his grandmother, he hadn’t counted on Grandma Jean flying halfway across the country to meet her at Christmas. Angie Black agrees to the deal only because she could use a fake boyfriend for her own reasons. Their arrangement seems to solve both of their problems. That is, until unexpected feelings arise. With his deployment looming, will they figure out that they’re meant to be before they find themselves half a world apart?