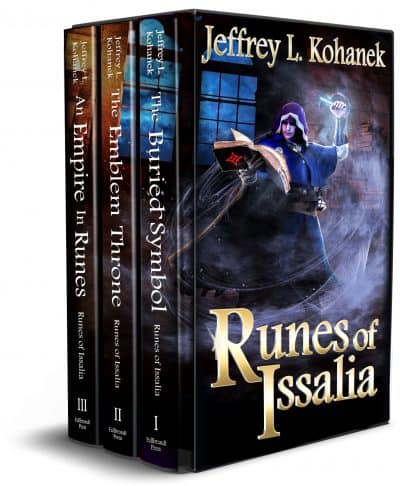 Books included in this boxed set are:

Buried away for centuries, a forgotten magic lurks . . . waiting to return

They tell Unchosen, “Accept your fate and you’ll be rewarded in the next life.” The threat of execution is their recourse.

Rejecting his role as an outcast, Brock risks his life and obtains a false rune, marking him a member of the Empire’s ruling class. Under a veil of deception and backed by natural talent, the teen then schemes his way into a school where the Empire’s future leaders are trained.

Within the Academy, a legendary school of magic, science, politics, and combat, he uncovers secrets kept hidden for centuries—secrets that expose cracks in the foundation of Empire society. Among his discoveries is a long forgotten magic, powerful and dangerous—a magic he is determined to wield. Caught between his continued charade and a desire to tame his frightening new abilities, one misstep on either front could destroy him.

The return of a lost magic. A dark prophecy. The quest to save humanity.

As they strive to become Masters within the Ministry, Brock and his friends resume their training at the Academy – an institution founded on magic, science, politics, and combat. However, an expansive web of lies resides within the Ministry, hidden behind a veil of benevolence. The exposure of one such secret forces Brock and his friends to flee the school with their lives in the balance.

They soon discover that a larger threat looms…one that could end everything. Guided by the cryptic words of an ancient prophecy and backed by a forbidden magic they have yet to master, Brock and his companions embark on a quest to retrieve knowledge tied to a long lost throne, knowledge that might save humanity from extinction.

AN EMPIRE IN RUNES

A destructive magic. An unstoppable army. The final battle to decide the fate of mankind.

The eastern cities of Issalia lay in ruin, destroyed by an army of monsters so twisted that they devour their victims, dead or alive. Led by a boy named Brock, a group of teens scramble to find a means of stopping this dark force.

Joined by fierce Tantarri warriors and a squad of raw paladin recruits, Brock leads a band of former slaves to battle. The future of mankind hinges upon a powerful, yet destructive magic . . . a magic they are still learning to control.

As foretold in an ancient prophecy, this rag-tag force gathers upon the Tantarri plains, prepared to face an army of giants with vastly superior numbers. All the while, they must remain vigilant against a secret organization within the Ministry, led by radicals who will do anything to prevent the return of Chaos.