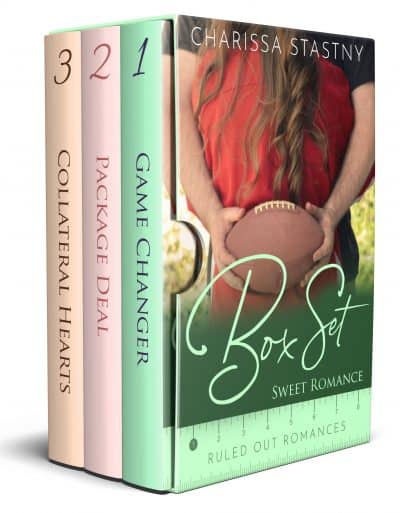 Star-crossed lovers meet in this set of stand-alone stories but rule each other out. Life though, with its twists & tangled turns, bring each of the unlikely duos together to discover their unique HEAs. Set includes: Game Changer, Package Deal, & Collateral Hearts.

Game Changer – Book 1
Can he catch the one who’s trying to get away?

Meridee Mansford wants nothing to do with the popular crowd, but that doesn’t stop her from dreaming about the hunky football player who visits the campus ice cream shop where she works. Still, she’s smart enough to know he’d never notice a girl like her, and she’d never want him even if he did. Too much unwelcome attention.

Parker Harrington basks in the glory that’s been his since the game-changing passes he caught that pushed his team into the national spotlight. The cheerleaders who used to ignore him when he sat the bench have now become his most devoted fans. But when he accidentally crashes into a quiet coed and covers her in orange chicken, it throws off his offensive game and changes everything.

As fate, ice cream, and orange chicken throw the opposites together, will Parker continue keeping company with women who are all wrong for him, or will he risk his heart on the one who’s trying to get away?

Single mom Spring has no desire to date again, so she’s surprised at her best friend’s wedding when a handsome man’s flirtations charm, instead of annoy her. However, when her toddler runs up and calls her Mommy, she can tell by his reaction that her daughter is a deal-breaker. He can’t escape fast enough.

Hudson Sandel proudly owns his bachelor status at his little brother’s wedding. Too bad the only woman who tempts him there has a daughter that rules her out. Instant fatherhood isn’t on his agenda. Yet, when the kid throws a tantrum, he swoops in to keep her from ruining his brother’s special night and feels uncomfortably good in the hero’s role.

As fate, lollipops, and toddler tantrums keep throwing the angelic duo into Hudson’s path, will he risk his heart and dreams on the package deal, or keep climbing up the corporate ladder?

Collateral Hearts – Book 3
Can a bet lead to love?

To escape the stress of college studies and caring for her sick mother, Ainsley Howard hides away with a book after her shift ends at the library each night. When a sexy patron surprises her with a kiss and begs for a date, she wonders if she’s fallen into the pages of one of her romance novels.

After Ty Kartchner bets his friends he can get the stern librarian to kiss him, big money is laid on the table. The guys know there’s no way he’ll succeed. But when he not only kisses the uptight chick, but easily convinces her to go out with him as well, Ty sees a chance to solve his financial woes. Raising the stakes, he places the bookworm’s heart down as collateral and determines to win at any cost.

As fate, literary classics, and deathbed promises bring the unlikely couple together, hearts tangle in Ty’s web of wagers, until he discovers too late that winning might actually make him lose what he loves most.