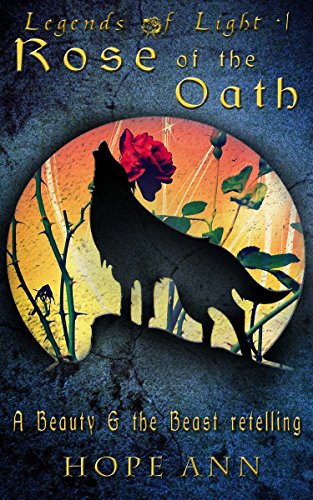 Rose of the Oath: A Beauty and the Beast Novella (Legends of Light Book 1)

Alone with her two younger sisters, Elissa watches the road desperately for her brother’s return. Instead, she receives news of his capture by a figure cloaked in wolf skins. With rebels drawing nearer, she sets off to save her brother. There is no one else who can.

War clouds the horizon and rebels gather under a mysterious leader. Alone with her two younger sisters, Elissa watches the mountain road desperately for her brother’s return. Instead, she receives news of his capture by a strange figure covered in scars and cloaked in wolf skins.

With rebels drawing nearer, she sets off to find her brother. To save him. There is no one else who can.

Yet she soon finds the rose that granted her warning now holds her captive in safety. Outside the valley, war threatens those she loves most. Though her strange host claims the ancient promises of the Prince’s return and victory over the rebels, Elissa knows the blood-drenched truth. She is on her own. Elissa will do anything to keep her family safe, but more than one kind of wolf stalks the Blackwood and danger lurks closer than she could ever imagine.

Perfect for those who love fantasy, but don’t have the time to sit down for a full-length novel, this first novella in the Legends of Light series presents the story of Beauty and the Beast as you have never read it before. Danger, sacrifice, and treachery combine a thrilling retelling of a favorite fairy tale.

Each Legends of Light novella focuses on one of the nine aspects of the Fruit of the Spirit while also following the conflict between the Prince and Tauscher and retelling popular fairy tales in a clean, exciting, and inspiring manner.