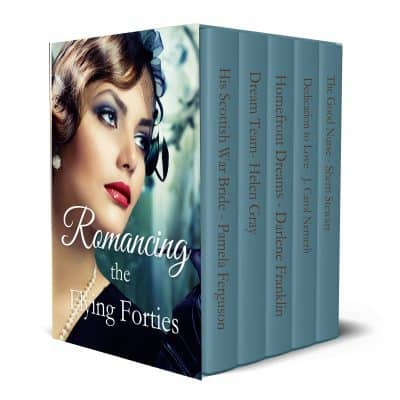 His Scottish War Bride
As a motorcycle dispatch rider in London during World War II, Maggie Cameron faced her share of dangerous situations. Yet none filled her with as much dread as the thought of moving to America to join her G.I. husband, John MacPhee, after having been separated for six months. Except for the beautiful Blue Ridge Mountains, everything in Lilac is different from her beloved Scotland. How long before John discovers his Scottish bride is completely unsuited for life as a banker’s wife?

Life in the orderly MacPhee household has been completely upended since John’s return from the war. His father’s sudden injury puts John in charge at work and at home, leaving little time for battle scars to heal. Will Maggie forgive him for dragging her away from the country she loves and into his chaotic life?

As the newly elected mayor of Maple Notch, the war widow must lead her town through the dark days of World War II. But where she finds comfort in tradition, the town council insists on trying new ways of handling the homefront challenges. Her most untraditional opponent? Councilman Ralph Quincy.

High school principal Ralph never expected to become a friend to Clarinda and her family. But as she spars with him over the war effort, the smart, spirited mayor is the most compelling woman he’s ever known. Can they put aside their differences and fight for both their town and a future together?

Recently returned home from WWII, Leroy must start life anew. But dreams of the war and memories of Gloria’s betrayal don’t make that easy. When he meets another Gloria—and finds himself inexplicably drawn to her—those chaotic feelings only multiply.

Gloria Jadwin has left her nursing job, and heartache, behind to play baseball with the All-American Girls Professional Baseball League. While on leave with a knee injury, she accompanies her cousin’s wife to Texas and meets Ruby’s brother, Leroy, an unrealistic attraction flares.

Can a jaded widower-tough soldier from Texas and a golden haired nurse from Missouri possibly form a forever team of their dreams?

Dedication to Love
Jillian Spencer is bound and determined to make it as a topnotch newspaper reporter, but in 1940, that’s no easy task. Her chance comes when the president of the United States arrives for the dedication of the Great Smoky Mountains National Park and her job is to report on this auspicious occasion. On her way to cover that story, her editor-in-chief redirects her to another news-worthy event, the Tuckaseegee flood, a catastrophic occurrence that occurred two days earlier, leaving the lives of many mountain folks in shambles. While gathering information for the article covering the flood, Jill finds herself in a life or death situation.

Cameron Murphy, park ranger at Deep Creek Civilian Conservation Corps., is thankful to have been at the right place, at the right time. He soon learns that the woman he’s just rescued has a tender heart deeply touched by the suffering of his neighbors. He’s more than willing to help with her newspaper article, but as her dark eyes and determination pierce right to his soul, dare he hope that she’ll turn her tender heart toward him?

The Good Little Nurse
Analise Bigelow is nine safety pins away from realizing her lifelong dream of becoming a nurse. A single-minded focus has gotten her to her final year of nursing school in Lansing, Michigan, and June 1940 is two short quarters away. It hasn’t been easy. Doctors don’t take a five-foot-nothing student nurse seriously. And there are so many distractions—the resident who invades her space, the intern who invades her thoughts, and the patient who invades her heart. Immerse yourself in another era, but don’t forget to lock the door!