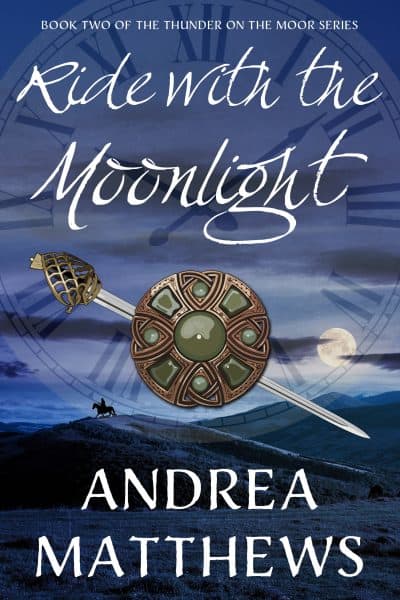 Ride with the Moonlight (Thunder on the Moor Book 2)

With Will accused of March treason and sentenced to hang for trysting with a Scot, and Maggie returned to Scotland where she’s doomed to marry Ian Rutherford, are their dreams shattered forever, or can the strength of their love overcome even these obstacles?

After rescuing sixteenth-century Border reiver Will Foster from certain death at her family’s hands, time traveler Maggie Armstrong finally admits her love for the handsome Englishman, though she can’t rid herself of the sinking suspicion that her Scottish kin are not about to let them live in peace. What she doesn’t expect is the danger that lurks on Will’s own side of the Border.

When news of their plans to marry reaches the warden, he charges Will with March treason for trysting with a Scot. Will and Maggie attempt to escape by fleeing to the hills, but when Will is declared an outlaw and allowed to be killed on sight, they can no longer evade the authorities. Will is sentenced to hang, while Maggie is to be sent back to her family.

Heartbroken, she has no choice but to return to Scotland, where her uncle continues to make plans for her to wed Ian Rutherford, the wicked Scotsman who she now realizes murdered her father in cold blood. With Will facing the gallows in England, and herself practically under house arrest in Scotland, she continues to resist her uncle’s plans, but her efforts are thwarted at every turn.

Will’s family, however, is not about to stand by and watch their youngest lad executed simply because he’s lost his heart to a Scottish lass. A daring plan is set into motion, but will it be in time to save Will’s life and reunite the lovers? Or will Ian’s lies prompt Maggie’s family to ensure the bond between them is forever destroyed?