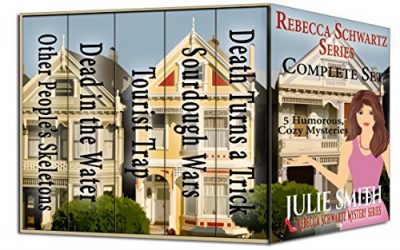 Funny, lively lawyer Rebecca Schwartz is a perennial favorite among cozy readers who can’t get enough of smart-mouthed women sleuths. You can’t read just one, they’re like chocolates! And now, for the first time, you can get all five for a yummy bargain price.

Funny, lively lawyer Rebecca Schwartz is a perennial favorite among cozy readers who can’t get enough of smart-mouthed women sleuths. You can’t read just one, they’re like chocolates! And now, for the first time, you can get all five for a yummy bargain price—only pennies more than half price. That’s what we call a delicious Kindle deal! And by the way, they go well with chocolates.

Death Turns a Trick
A rollicking tale of murder, romance, and bordellos . . .

Rebecca Schwartz, nice Jewish lawyer with a few too many fantasies, is happily playing the piano in a whorehouse when she suddenly finds herself assigned to making sure a near-naked state senator escapes a police raid. That dirty job done, a lovely evening turns even more delightful when she’s picked up by the cops and spends the next two hours at the Hall of Justice. Could this day get any worse? Of course! Guess who arrives home to find a dead hooker on her living room floor?

Fans of Janet Evanovich, Joan Hess, and Elizabeth Peters will get a kick out of this one.

The Sourdough Wars
To you, it’s just a frozen lump of dough; but to some, it’s life and death . . .

Especially to handsome Peter Martinelli, who wants to auction off the fabled sourdough starter from his family’s famous bakery. But who’d buy a frozen hunk of flour and water? Only, it turns out, every bakery in San Francisco, a national food conglomerate, and an upstart ringer with a mysterious backer.

Someone would even kill for it. And does.

Tourist Trap
Fear stalks the streets! reports the San Francisco Chronicle. It also stalks these pages, and so do a lot of laughs.

You just know the Easter sunrise service is going to be a bummer when the San Francisco fog lifts to reveal a body nailed to a landmark cross. Next: mass shellfish poisoning at Pier 39. A very different kind of serial killer is operating here—one who seems to have a grudge against the whole city.

And this is a very different kind of serial killer tale—a funny one. Well, actually, what serial killer’s funny? But lawyer sleuth Rebecca Schwartz is warm and witty, never takes herself too seriously, and on one occasion offers closing testimony with green hair.

Dead in the Water
Thar she floats! Deader than flotsam, right in the thirty-foot kelp tower at the Monterey Aquarium.

She’s the aquarium director herself, beloved by all except Marty Whitehead, lawyer Rebecca Schwartz’s weekend hostess, now cooling her heels in the county clink. So what’s the etiquette when your hostess is arrested for murder?

In Rebecca’s case, that’s easy—sign on as her lawyer, try to keep Marty’s kids’ out of the deep end, and somehow avoid drowning in the sea of lies gushing from her client’s mouth. And everyone else’s.

Other People’s Skeletons
Rebecca Schwartz thought she knew her best friend—and her boyfriend. Not to mention her family. But what she’s about to learn will rock her world.

Secrets spill out of these pages like hornets out of a nest, each with its own distinct sting.