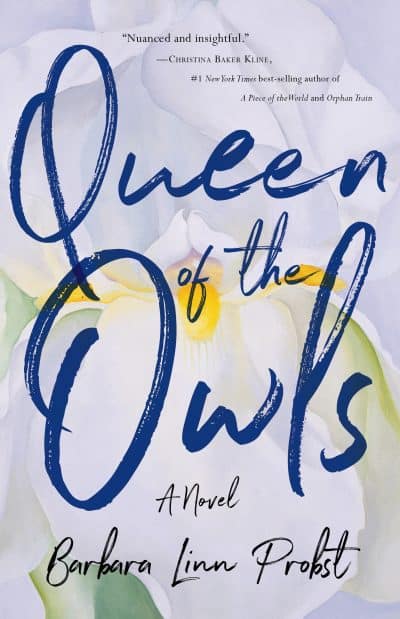 Queen of the Owls

Elizabeth yearns to be fully seen—by Richard, the charismatic photographer who offers her a chance at the kind of embodied knowledge she’s never had. A chance to be like her beloved Georgia O’Keeffe. She didn’t say she wanted to be seen by the whole world.

A chance meeting with a charismatic photographer will forever change Elizabeth’s life.

Until she met Richard, Elizabeth’s relationship with Georgia O’Keeffe and her little-known Hawaii paintings was purely academic. Now it’s personal.

Richard tells Elizabeth that the only way she can truly understand O’Keeffe isn’t with her mind—it’s by getting into O’Keeffe’s skin and re-enacting her famous nude photos.

In the intimacy of Richard’s studio, Elizabeth experiences a new, intoxicating abandon and fullness. It never occurs to her that the photographs might be made public, especially without her consent. Desperate to avoid exposure—she’s a rising star in the academic world and the mother of young children—Elizabeth demands that Richard dismantle the exhibit. But he refuses. The pictures are his art, he tells her. His property, not hers.

As word of the photos spreads, Elizabeth unwittingly becomes a feminist heroine to her students, who misunderstand her motives in posing. To the university, however, her actions are a public scandal. To her husband, they’re a public humiliation.

Yet Richard has reawakened an awareness that’s haunted Elizabeth since she was a child—the truth that cerebral knowledge will never be enough.

Elizabeth wants what Georgia had.

But how much is she willing to risk to be truly seen and known?