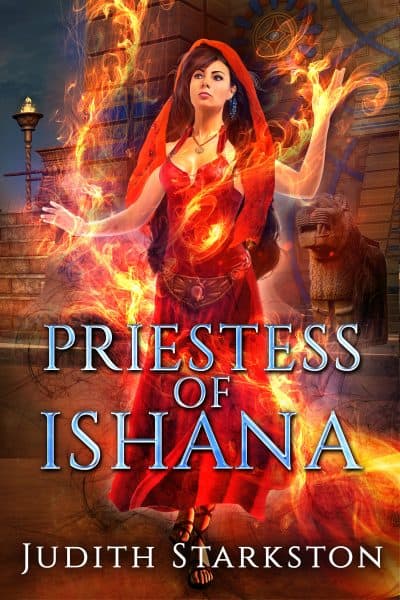 “What George R.R. Martin’s Game of Thrones did for the War of the Roses, Starkston has done for the forgotten Bronze Age Hittite civilization. Mystery, romance, political intrigue, and magic . . .” —Amalia Carosella

A curse, a conspiracy, and the clash of kingdoms. A defiant priestess confronts her foes, armed only with ingenuity and forbidden magic.

An award-winning epic fantasy, Priestess of Ishana draws on the true life of a remarkable but little known Hittite queen who ruled over one of history’s most powerful empires.

A malignant curse from the Underworld threatens Tesha’s city with fiery devastation. The young priestess of Ishana, goddess of love and war, must overcome this demonic darkness. Charred remains of an enemy of the Hitolian Empire reveal both treason and evil magic. Into this crisis, King Hattu, the younger brother of the Great King, arrives to make offerings to the goddess Ishana, but he conceals his true mission in the city. As a connection sparks between King Hattu and Tesha, the Grand Votary accuses Hattu of murderous sorcery. Isolated in prison and facing execution, Hattu’s only hope lies in Tesha to uncover the conspiracy against him. Unfortunately, the Grand Votary is Tesha’s father, a rash, unyielding man, and now her worst enemy. To help Hattu, she must risk destroying her own father.

If you like a rich mixture of murder mystery, imperial scheming, sorcery, love story, and lavish world-building, then immerse yourself in this historical fantasy series. See why readers call the Tesha series “fast-paced,” “psychologically riveting,” and “not to be missed.”