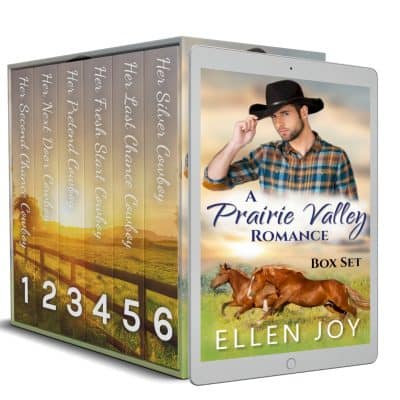 Follow the Boudreau sisters and their handsome ranchers in this clean romance series about family, friends, and love. Enjoy second chances, fresh starts, last chances, a fake romance, and a later-in-life romance.

Her Second Chance Cowboy
After many years and a failed marriage, Georgie has come back to town with her kids to escape her problems. When Sam sees Georgie, old feelings resurface and he wants to pick up where they left off, but he knows he messed things up with her back in high school. Just as it seems they might have a second chance at romance, Georgie’s kids ask to go back to their father. Georgie is done with him, but she doesn’t want to see her kids go back without her either. Can Sam win over Georgie, and her kids, and get that second chance?

Her Next Door Cowboy
Ryan’s career as a champion bronc rider came to an abrupt end when an accident left him injured. After drinking away his sorrows, he hit rock bottom and moved back home to the family ranch. Rosie grew up next door to Ryan and she’s happy to see him return, but when he comes into her bar she refuses to serve him, knowing his struggles to stay sober. Nevertheless, a friendship develops as she helps Ryan work on his relationship with his son. When she tries to be more than friends, he pushes her away, afraid that he’s wrong for her. But, after Rosie starts seeing another guy, Ryan realizes he’s made the biggest mistake of his life.

Her Pretend Cowboy
Annie is a washed-up country music singer who returns to her hometown and starts playing music with her old friend, Luke, to try and get her career back on track. Annie thinks her prayers have been answered when they get noticed by a producer. But, there’s a catch. He’ll only sign them as a duo and he wants them to pretend to be a romantic couple in public. Also, he wants Luke to play the part of a cowboy. Luke wants to help Annie, but he’s hesitant to leave his farm to go off and pretend to be something he’s not. But, they both have to make some tough decisions when they realize that they’re no longer pretending, at least when it comes to their feelings.

Her Fresh Start Cowboy
Olivia and Jesse were high-school sweethearts, but when Olivia moved to the city to become a big shot attorney, the distance was too much for Jesse, who stayed behind to work on his family’s ranch. When Olivia comes back to visit, Jesse quickly realizes he was wrong to have let her get away before, but he figures it’s too late—there’s no way his life on the ranch can compete with her rising career and the Congressman she’s about to marry. But, as Olivia reconnects with her small town roots, her old feelings for Jesse come back and she’s torn over what, and who, she really wants.

Her Last Chance Cowboy
After marrying young and having a child, Hannah realized the guy of her dreams was actually a nightmare. Now, she just wants to put her past behind her. Jake just left the military and moved into the ranch next door, but he’s having a hard time relaxing when his ranch is losing money. When Hannah’s ex shows up and harasses her, Jake steps in to help. Hannah is grateful and offers to lend Jake a hand with his ranch and Jake starts to fall for Hannah. But she doesn’t want to drag him into her messy life. But, Jake’s been through similar issues in his own life and he understands Hannah better than she thinks.

Her Silver Cowboy
Maggie’s late husband, John, passed away ten years ago and her only love since has been for her family. That is, until she meets Brooks, a successful rancher from Texas who sweeps her off her feet. But, Maggie’s feelings for Brooks are overshadowed by guilt since her heart belonged to John for so long. This seasoned romance is the perfect ending to a heart-warming series.