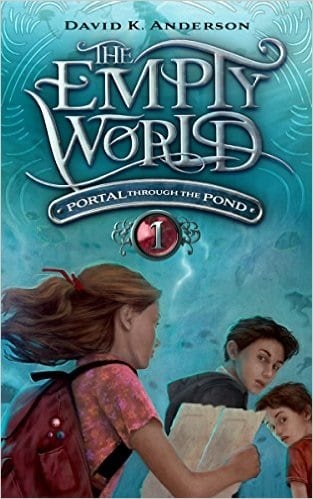 Christy inherits the secret of a pond that’s actually a portal to another world. When her friend falls into the pond, it’s up to Christy to save him before their families drain the pond, trapping them in the Empty World forever.

Fall into the pond, and land in an alien world.

When her grandmother dies, 13-year-old Christy inherits an old family secret: the pond behind her house is in fact a portal to another world. What’s more, she learns that her grandfather went through the portal when he mysteriously “disappeared” nine years ago. Christy but she tries to respect her grandmother’s final wishes and not go exploring, but when a classmate named Rob falls into the pond, she has to act.

Since no one would believe her if she told them the truth about the pond, Christy arranges her own rescue party. In order to rescue Rob, she’ll have to brave a bizarre alien landscape, evade hostile creatures, and protect Danny, the boy from next door who followed her through the portal.

Meanwhile on Earth, the grown-ups launch a frantic search, and they’re willing to drain the pond to find out what happened. Will Christy be able to find her grandfather, rescue Rob, and return safely to Earth before she becomes a permanent resident of the Empty World?

Pick up your copy of Portal Through the Pond, and jump into an alien world.