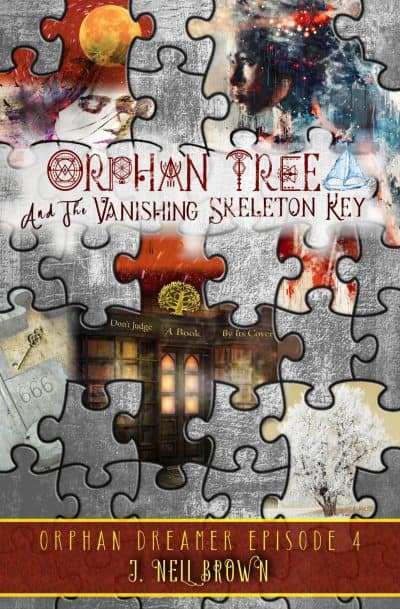 The Orphan Dreamer is about to learn that some dreams should never come true in Orphan Tree and the Vanishing Skeleton Key, where betrayal, harsh realities, twists, and ancient relics converge with angelic warfare and a seventeen-year-old depressive schizophrenic.

Daniela, the Orphan Dreamer, is about to learn that some dreams should never come true. A brainiac and classic introvert, she adores her biological research at the world-famous World War II atomic bomb lab, Los Alamos National Laboratory. But secretly, she has another life: launching on a brave quest to save Earth from a supernatural invasion. It’s totally not your normal college-sophomore stuff!

Releasing the power of the Glass Tattoo—her time-traveling device—Daniela slips through time and explores three realities where she must gather critical clues to help solve an ancient riddle: who is Chi Xi Stigma—666, the antichrist—a dark force that plans to eradicate humans by unleashing a ruthless pandemic and instigating World War III, a.k.a., Armageddon.

Will the Orphan Dreamer—Earth’s newest kick-butt Indiana Jones—solve the mystery of an ancient Hebrew statue found inside the ruins of a bombed World War II–era church in Hiroshima, Japan?

Will she complete this mission in enough time to discover the deadly secrets behind an Apache cave drawing—the answer to a mystery that will catapult her on a mission to identify the antichrist and stop his impending pandemic and global war?

Because if she fails, humanity and Earth may not survive Armageddon—the most deadly war of all time where humans must fight an extraterrestrial army of Nephilim, half-demon, half-human beings currently hiding and training on Wormwood, an invisible planet.

Buckle up for a fun fantasy ride.