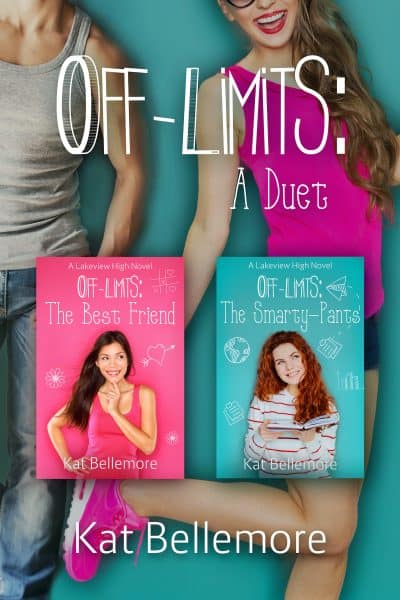 Off Limits: The Duet (Off Limits)

If you like awkward situations, first kisses, and laugh-out loud moments, you’ll love the first two books in the Off Limits YA romantic comedy series. Grab this duet and start reading today!

Off Limits: A Duet contains the first two books in the Off Limits YA romantic comedy series. If you like awkward situations, first kisses, and laugh-out loud moments, you’ll love these sweet romances.

Off Limits: The Best Friend
She’s the high school klutz. He’s the best friend. But it wasn’t enough.

Alexa Parker’s only goal is to get into the best pre-med program in the country. No big deal. Except that nothing in her life ever goes as planned.

If an ice cream machine is going to explode, it will be her pulling the handle.

If a cactus is going to be sat on, it will be her butt that will be full of needles.

The only thing going right is the fact that her lifelong—and only—friend, Charlie, has stuck by her side through it all. Until Alex realizes she likes him more than a friend, and she manages to mess that up too.

Off Limits: The Smarty Pants
She’s a free spirit. He’s bound by the rules. A school trip is going to change everything.

Gracie Porter was born an artist. But then her mom goes back to work and Gracie suddenly finds herself taking care of her six younger siblings, with no time for herself. When Gracie is offered a spot on a weeklong school trip, she jumps at the chance. She didn’t count on the cute, but nerdy, Markus Brown being there as well.

Markus Brown is too smart for his own good. At least, that’s how everyone else sees him. In reality, he’s living the life his father paved for him. When Markus ends up on the same school trip as Gracie, his secret crush, he finally feels like he has permission to be himself, and to go after the girl of his dreams. But he’s been entrenched in his father’s thinking far too long, and there are some old habits that won’t die without a fight.

Gracie and Markus have one week to open their hearts, learn to trust each other, and realize that life is better when they don’t try to do it alone.