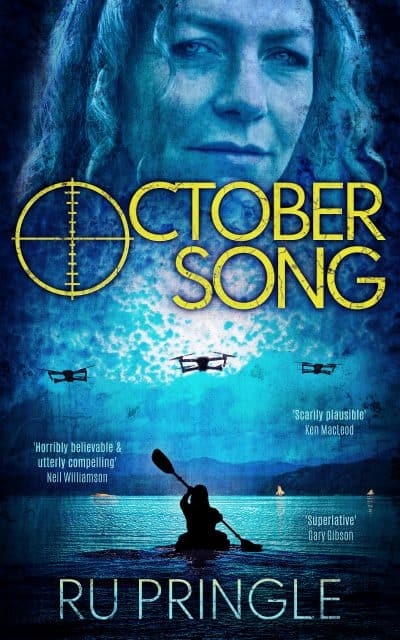 Set on the West coast of Scotland and with elements of police procedural, spy novel and political action thriller, October Song is both a darkly gripping roller-coaster ride and a blistering reflection on a world on the edge of collapse.

COIRA KEIR is a long-serving police officer. Abrasive, but respected by her peers, she has an enviable track record. When a bomb explodes outside the North British Council Building at Holyrood, Edinburgh, dozens of bystanders are left dead. Among the critically wounded is the Prime Minister of the United Kingdom, whose safety was Keir’s responsibility.

Army veteran Sebastian Blakeslee is an operational advisor for MI5, the domestic security agency of the United Kingdom. Lorna Ainsworth is the agency’s territorial chief. Together, they find themselves leading a joint police and MI5 taskforce. Its mission: track Keir down before more bombs go off.

What follows is a cat-and-mouse chase towards the front of an intensifying war – along a wild coast where thousands of desperate boat-borne refugees are hiding. Meanwhile, as the taskforce will discover to its cost, someone seems to be going to extraordinary lengths to stop Keir being found.

‘An absolute piledriver of a dark future thriller that instantly hooks you and doesn’t let go till the end. Horribly believable and utterly compelling.’ Neil Williamson, author of The Moon King and Thirty Years of Rain.

‘Reminded me of Iain Banks at his fiery best.’ ‘Reads like a perfectly structured thriller, but filled with the same rage against the political-military establishment that nestled deep in Iain Banks’ heart. Its combination of a gritty noir aesthetic with one of the most chilling depictions of the near-future since Children of Men results in a work of superlative readability.’ Gary Gibson, award-nominated author of Angel Stations and Stealing Light.

‘A grim and gripping near-future thriller with sharp political edges and scarily plausible projections, rooted in intimate knowledge of real places.’ Ken MacLeod, award-winning author of The Star Fraction and The Night Sessions.