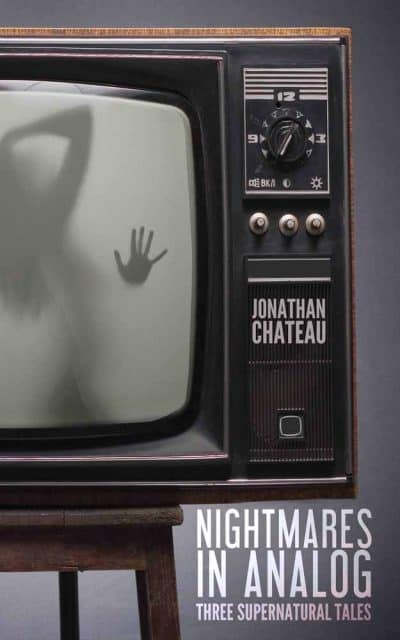 Nightmares in Analog is a collection of three supernatural, page-turning novella—stories that test the boundaries of lust, vanity, and sacrifice.

The fading memories Jacob has of his deceased mother are buried on a few VHS home movies. Recently haunted by recurring dreams of her, he sets out to pick up a used VCR, and finds one at a local yard sale.

However, this is no ordinary VCR. According to the owner, this particular model not only plays movies, but it allows one to communicate with the dead.

Fueled by curiosity, Jacob takes it home and soon discovers that what he possesses opens a doorway to darkness, death, and lust.

Hours at the gym and nothing to show for it. But once a coworker introduces him to RECRÜT, a sports energy drink that guarantees results, the gains come quick.

It isn’t long before Miller attains the godlike physique he’s always wanted. Unfortunately, these twelve little ounces come with a side effect—a high price he never expected to pay.

And the more RECRÜT he drinks, the more his world begins to unravel, uncovering a sinister side of himself he never knew existed.

For the past six months, Bryan Combs has been consumed with guilt. He cheated on his wife, Sirena, and fell for the seductive charms of his boss, Carmela.

The adultery proved too great for Sirena to handle, so she hopped in her car and drove it into the ocean. Her body was never recovered.

While the fling may have ended, the remorse still remains, and now Bryan buries himself at work, opting for late night shifts at the mall, often drinking himself to sleep in the back office of his once beloved job.

But everything changes the morning they show up . . .

Strangers at his office door . . . screaming, pleading and begging him to open the door because they’re being pursued and desperately need somewhere to hide.

As he awakens from his drunken stupor, he begins to wonder if this some sick joke put on by Carmela? Retribution against him for ending their torrid affair?

Bryan wouldn’t be sure until he let these strangers in.

However once he does, he soon witnesses for himself what has these people so afraid, so panicked, that he finds it impossible to stay caught in his own spiral of self-loathing.