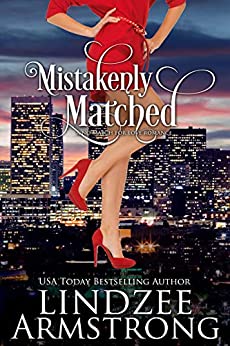 What happens when you impersonate your deceased identical twin to score a date with your long-lost high school crush?

When wedding planner Kelsey makes a late-night ice cream run, the last thing she expects to leave the grocery store with is a date. But when Bryce, her long-lost high school crush, mistakes her for her deceased identical twin, Kelsey’s attempts to clear up the misconception fail. Instead, Kelsey agrees to the date under false pretenses. What can it hurt to live out her teen fantasies?

After a lifetime of hiding behind his insecurities, Bryce is finally ready to take risks. He’s got a fantastic new job as the marketing director of an events center, and now he’s got a date with the girl he liked in high school. At least, that’s who Bryce thinks he’s out with—until Kelsey tells him the truth and their date ends in disaster.

When one of Kelsey’s brides chooses Bryce’s event center for her wedding, they’re forced to work together. Kelsey can’t help falling for Bryce, but fears he’s using her as a replacement—especially when their first kiss has unexpected consequences. Can Bryce convince Kelsey she’s not her sister’s stand-in before it’s too late?

This is a full-length sweet/clean contemporary romantic comedy that will delight readers who love Hallmark movies. Each book in this series by USA Today bestselling author Lindzee Armstrong can be read as a stand-alone.

This story was previously published as First Love, Second Choice. It has been revised to connect to the No Match for Love series, and expanded so that it is now more than double the length of the original, with four never-before-seen chapters in Bryce’s point of view!