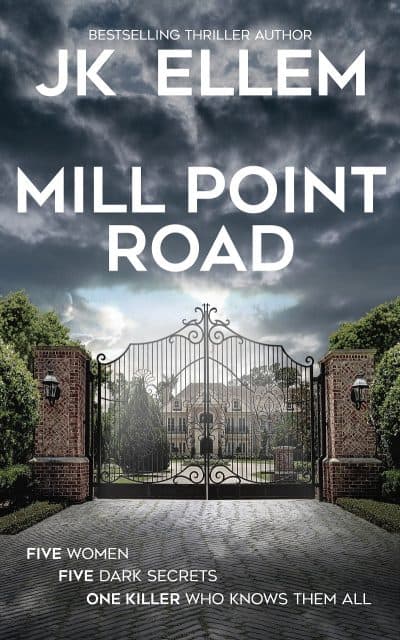 Four women. Four dark and sinister secrets. One killer who knows them all.

When Rebecca Cartwright,young and recently widowed, moves into the exclusive gated community of Mill Point Road, in the town of Ravenwood, Maryland, she thought she had found her sanctuary.

Amongst the beautiful homes, manicured lawns, and high walls, she soon discovers that the other women on Mill Point Road are hiding dark secrets.

But no one knows Rebecca is hiding her own secret, and it’s the darkest and most sinister of them all . . .

Detective Marvin Richards, a thirty-year veteran homicide cop from the tough streets of New York City moved to picturesque Ravenwood for peace and quiet. That was until a serial killer decided to dump their fourth victim near Mill Point Road.

Then there is Haley Perez, a rookie police officer who graduated top of her class, the only female in her entire cohort. And that can be a little tricky, especially when her fellow officers are now all male too.  Some say she’s abrupt,a little abrasive, and downright rude. Maybe it’s just sour grapes from her work colleagues who have tried to hit on her with no success. But Detective Richards sees something else in this intense, young woman whose instincts and cold-focus are wasted as a patrol officer walking the streets downtown.

Richards enlists the help of Perez, and together they go on the hunt for the Eden Killer, a cunning, evasive serial killer whose victims are all young, male, and named Adam.

The trail of clues leads them to Mill Point Road, where they discover something dark and sinister is lurking in this seemingly tranquil and insulated Garden of Eden.