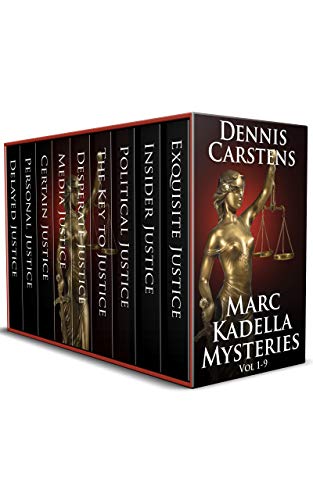 The Key to Justice
Marc Kadella’s beginning to question why he ever went into the law when a friend brings him the case all Minneapolis is watching—defending an accused serial killer. If he wins, it could turn his life around. If he blows it, he better go into sales.

Desperate Justice
After winning the case of a lifetime, Kadella welcomes the infusion of energy his career is receiving. Another lawyer asks him to represent the co-defendant in a murder trial resulting from a petty crime that spiraled out of control—the somewhat “accidental” murder of the nephew of Vivian Corwin, grande dame of the influential Corwin family.

Media Justice
An adorable—and very photogenic—two-year-old girl is kidnapped, and, when her remains are found, her twenty-two-year-old widowed mother Brittany is charged with her murder. But before she can even be charged, she’s been tried and convicted by the media—with tragic consequences.

Certain Justice
Marc was torn about representing oft-assumed psychopath Howie Traynor—his first homicide case—but even he was relieved when Howie was put away for forty years . . . Until, a decade later, his case is re-opened. And now not only Howie, but a handful of wrongfully-accused felons are back out on the streets.

Personal Justice
Mackenzie Sutherland is the classic black widow. All her late husbands were millionaires. Each died suddenly and quite mysteriously of massive heart attacks (in spite of no history of heart trouble). And each left their children with nothing—and their young, beautiful bride (of about a year or so) with millions. No one can resist Mackenzie’s charm—not even Marc.

Delayed Justice
Maddy’s new beau, investment analyst Rob Judd, is found murdered in his home—with an unconscious Maddy at the gruesome scene of the crime, clutching the murder weapon. Marc decides to take on the case in spite of his close connections to the client. He finds he must delve deep into the complex money laundering schemes of Rob’s employer to save Maddy from false imprisonment. Or worse.

Political Justice
The Macbeths take Washington—and leave a pile of bodies in their wake. In a searing political commentary laced with a gripping murder mystery that hits disturbingly close to home, Dennis Carstens tackles financial misconduct, scandalous cover-up, treason, and murder in a scathing imagining of an American White House nobody’s ever seen before, and yet one that is all too familiar . . . Power at any price.

Insider Justice
A toy to kill for.

Celebrated criminal lawyer Marc Kadella takes on the fall-out of a class action suit against a beloved corporate toy company gone wrong—and ends up falling down a rabbit hole of insider trading, sex scandal, political corruption, and murder, in a bleak yet accurate portrayal of the lewd world of financial crime, where not even children are protected from the greedy and power-hungry.

Exquisite Justice
Mix the “good” reverend with the devil’s advocate.

Minneapolis defense attorney Marc Kadella was hoping for a bit of peace after a failed homicide attempt in the form of a hit-and-run. But it’s hard to keep the peace in the midst of a string of police brutality accusations leading to civil unrest. Kadella finds himself trapped in a web of racism and corruption.