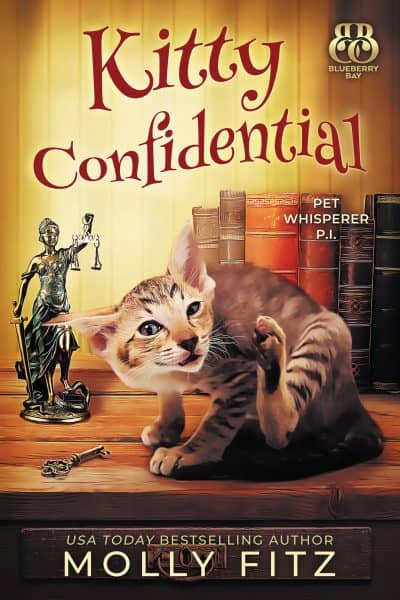 This talking cat has a murder to solve . . . But will his new human agree to play Watson to his Sherlock?

I was just your normal twenty-something with seven associate degrees and no idea what I wanted to do with my life. That is, until I died . . .  Well, almost.

As if a near-death experience at the hands of an old coffeemaker wasn’t embarrassing enough, I woke up to find I could talk to animals. Or rather, one animal in particular.

His full name is Octavius Maxwell Ricardo Edmund Frederick Fulton, but since that’s way too long for anyone to remember, I’ve taken to calling him Octo-Cat. He talks so fast he can be difficult to understand, but he seems to be telling me that his late owner didn’t die of natural causes like everyone believes.

Well, now it looks like I no longer have a choice; apparently my life calling is to serve as Blueberry Bay’s first ever pet whisperer P.I while maintaining my façade as a paralegal at the offices of Fulton, Thompson & Associates.

I just have one question: How did Dr. Dolittle make this gig look so easy?