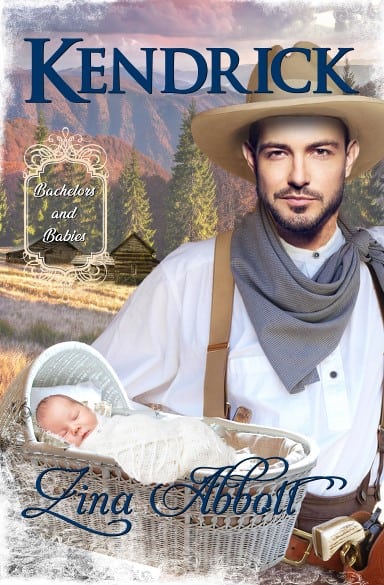 Kendrick: Too Old for Babies (Bachelors & Babies (Too Old in Columbia) Book 9)

A bachelor, a butcher who works with a meat cleaver in his hand—what is he supposed to do with a baby girl?

In late 1852, when Kendrick Denham reached Columbia, known as “The Gem of the Southern Mines,” he realized the easy-to-find placer gold was no longer that easy to find. He decided he would do better providing fresh meat to the townspeople. With extremely few women in the region, and most of the respectable ones already married, Kendrick entertains no ambitions for a wife and family. Then in 1854, the county sheriff rides over from Sonora. With a cryptic expression, he hands Kendrick a six-month-old baby girl. “The mother named you as the father.”

Now that her late husband’s stepson is of age to inherit the farm left to him by his birth father, Lydia Meyer and her two young sons have been forced out of her home of over ten years. She leaves Pennsylvania headed for the wild gold fields of Columbia, California. She dreads living off the charity of her older sister, who is just as disagreeable and overbearing as their late mother had been. Warned that most of the miners in California, many of whom left families back east to seek their fortunes, tend to be unsettled, uncouth, and prone to drinking and gambling, she worries it may be impossible to find a good father for her children. Even if she weds again, will it be another loveless marriage like her first?

Then there is baby Madeline, who is cast adrift in the world, all alone, with no one to love her. What will become of her?
Kendrick is a stand-alone, sweet, American, historical romance that is part of the multi-author series, Bachelors & Babies. Under the subtitle, “Too Old for Babies,” it is also part of the author’s own series, Too Old in Columbia.