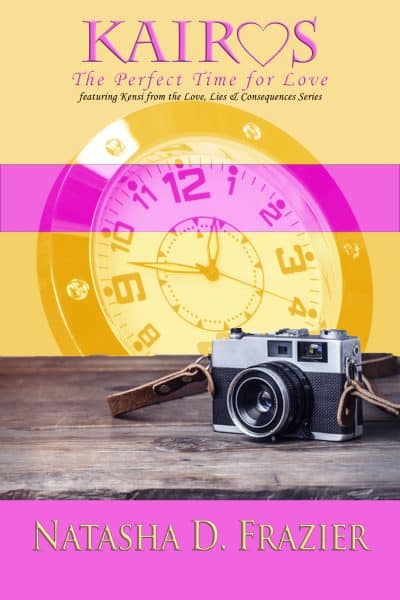 Kairos: The Perfect Time for Love

Kensi is up for a promotion for her dream job, but her boss’s idea of a promotion is to send her to Texas for another assignment. She is paired up with the handsome Darren, who helps her learn that delay can sometimes be a catalyst for something greater.

"There is a time for everything, and a season for every activity under the heavens." —Ecclesiastes 3:1

Kensi Jacobson believed in that truth with all of her heart, but when she’s up for a promotion for her dream job as assistant editor-in-chief of The Big Apple Chronicle, she hits a roadblock. She put in the work and trusted God for what she believed was her season of elevation, but her boss’s idea of a promotion was to send her to Pepperton, Texas, for another assignment.

This new assignment pairs her up with a handsome widower, Darren Shaw, who helps her learn that delay and disappointment can sometimes become a catalyst for something greater. Seemingly burdened with the fact that she is the only one in her circle who isn’t married with children, and a career that isn’t headed in the direction she planned, she begins to wonder when her time and season are coming. Will Kensi learn that Kairos—God’s perfect timing—is much more powerful than Chronos—her chronological timetable—and trust that things will fall into place at the right time?

What begins as a crush to her ego and life plan may become the perfect time for love and everything else she’s wanted.