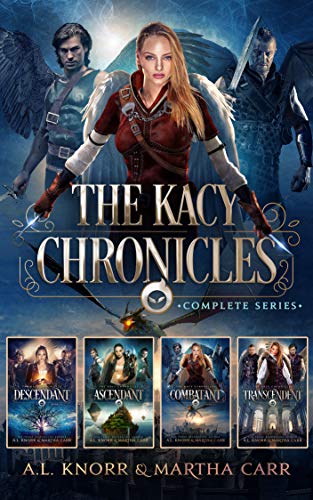 This box set includes all four books in The Kacy Chronicles, a Prophesies of Oriceran series full of portal-travel, magic, dragons, action, adventure, and romance. Written for anyone who has ever wanted to fly!

Born to a wealthy Virginian family, privileged Jordan’s got her life all planned out. Get her PhD, find the perfect Virginia man to marry, pop out a few more Kacy’s, and make her State Senator father proud.

If only Jordan could let the past rest.

When your mother disappears without a trace, it carves a gash that bleeds a long time. Jordan has never given up hope that her mother is alive. So when Jordan’s old nanny shows up with a mysterious locket containing a portrait of Jordan’s mother, Jordan believes her hope was not in vain.

When the locket opens a portal to an alternate universe and a stranger hurtles through to earth, it’s not her first clue that something very strange is at play.

Teaming up with Sol, a disgruntled courier who’s lost his wings, Toth, a hardened aerial mercenary, and Eohne, a brilliant Elven magician-inventor, Jordan embarks on a haphazard quest. Facing off with interfering barmaids, terrifying harpies, and a wicked Prince with plans to destroy an entire nation is only the beginning.

Can Jordan find her mother and learn the truth about her disappearance? What happens when Jordan learns she is not who she thinks she is?