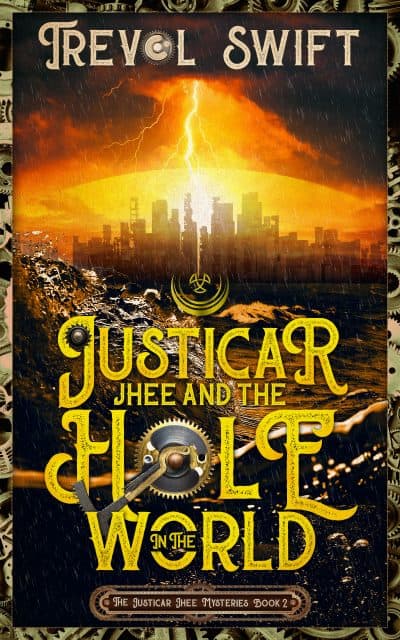 Galleon City, central point of the Empire, is a city being ripped apart by restless factions. Justicar Jhee arrives amidst this chaos, but it isn’t long before intrigue strikes once more and death makes landfall, too.

Galleon City is the central point in the Empire; the place where the Storm Shield protects the Blessed Isles from the wrath that surrounds them. But it is also a city that is being ripped apart by restless factions and swamped with refugees, the destitute and the unwanted.

Justicar Jhee arrives in the city in the midst of this chaos, but it isn’t long before intrigue strikes once more, in the form of illness and death at the nearby mine.

With fingers of accusation being pointed at multiple suspects, Jhee and a local detective are called upon to investigate. But they soon uncover a much wider conspiracy and even greater dangers lying in wait in Galleon City, with disreputable mining companies and government corruption, creating unrest that is threatening to spill over.

Now the unanswered questions are piling up. Why is Jhee’s wife Mirrei suddenly unwell? Why would someone plot to destroy the Storm Shield? And is it the blessing that they once thought it was?

With time running out, Jhee and her allies must stop a killer before they strike again and prevent an impending atrocity from wreaking havoc on the lives of millions.