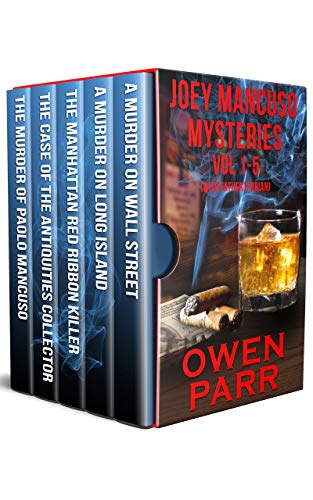 This rare crime mystery series has something for everyone—a tough guy, three awesome women, and a classic Golden Age gentleman-detective clergyman. The twist? The cop and the cleric are half-brothers who operate a PI firm out of their bar.

This rare crime mystery series has something for everyone—a tough guy, three awesome women, and a classic Golden Age gentleman-detective clergyman. The twist? The cop and the cleric are half-brothers who operate a PI firm out of their bar.

It’s a made-to-order for lovers of traditional mysteries, with the kinds of twists and scams and puzzles that warm a mystery fan’s heart like a shot of Jameson. Think Matt Scudder meets Father Brown. Also recommended for fans of Mickey Spillane’s Mike Hammer mystery series, and, of course, the Sherlock Holmes adventures.

A Murder on Wall Street
When one of Joey and Father Dom’s best customers dies in an apparent suicide—a Wall Street guy celebrating a new client the night before—they're just not feeling it. They know he wasn’t a guy who wanted to die; and they quickly find out he was someone a lot of people wanted dead.

A Murder on Long Island
Just in time for Christmas, a wealthy real estate developer named Harold Longworth is on trial for the murder of his wife in the bedroom of their Long Island mansion, and the Manhattan elite are glued to their seats. Things are looking pretty grim when his team asks Joey to investigate the case, but better when he discovers that Mrs. Longworth’s personal and professional lives were a sticky web of secrets and lies, populated by a rogue's gallery of jealous lovers and corporate conspirators.

The Manhattan Red Ribbon Killer
Joey is called in to help the Midtown South precinct solve a series of brutal murders targeting young professional women. Case #1 at first seems to be an eve of kinky sex gone wrong. But when second and third bodies turn up—this time with the sign of the cross carved into their breasts—New York’s finest think they have a serial killer on their hands.

The Case of the Antiquities Dealer
From the beginning, there’s just something funny about parents who didn’t report a missing student right away, and days later still want no police. Hold it here! This is their beloved daughter, last seen leaving for a date. Why wouldn’t they want as much firepower as they can get? Because they know too much, that’s why—and Owen Parr’s clever detective senses that. Joey’s first job’s to save the girl, but no way he’s going to stop there. The scrappy PI and ex-cop’s going to get answers if it kills him.

The Murder of Paolo Mancuso
Joey Mancuso was just a kid when he watched a stranger walk into a Little Italy bar, shoot his mobster dad in the chest, and calmly walk back out, disappearing into the Manhattan din. The murder was never solved. And the old mob adage “an eye for an eye” went unfulfilled. But now, at death’s door, infamous mobster Tony the Hammer summons Joey and utters three mysterious words: “Wetherly Stevens, Barcelona.” Joey has no doubt he’s just been told how to find his father’s killer.