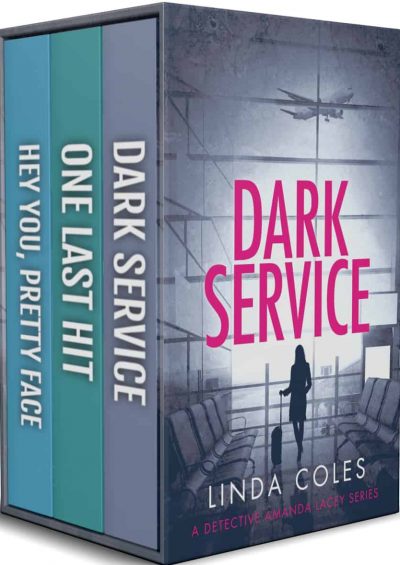 Start reading the popular Detective Jack Rutherford and Amanda Lacey series with three books together. You won’t find a more likable partnership as together they work crimes in South London in search of the truth. Prepare to be hooked.

Dark Service
The dark web can satisfy any perversion, but two detectives might just pull the plug . . .

Taylor never felt the blade pressed to her scalp. She wakes frightened and alone in an unfamiliar hotel room with a near shaved head and a warning: tell no one.

As detectives Amanda Lacey and Jack Rutherford investigate, they venture deep into the fetish-fueled underbelly of the dark web. The traumatized woman is only the latest victim in a decade-long string of disturbing—and intensely personal—thefts.

To take down a perverted black market, they’ll go undercover. But just when justice seems within reach, an unexpected event sends their sting operation spiraling out of control. Their only chance at catching the culprits lies with a local reporter . . . and a sex scandal that could ruin them all.

One Last Hit
The greatest danger may come from inside his own home.

Detective Duncan Riley has always worked hard to maintain order on the streets of Manchester. But when a series of incidents at home cause him to worry about his wife’s behavior, he finds himself pulled in too many directions at once.

After a colleague Amanda Lacey asks for his help with a local drug epidemic, he never expected the case would infiltrate his own family . . . And a situation that spirals out of control.

Hey You, Pretty Face
A perfect winter storm of crime . . .

An abandoned infant. Three girls stolen in the night. Can one overworked detective find the connection to save them all?

London, 1999. Short-staffed during a holiday week, DC Jack Rutherford can’t afford to spend time on the couch. With a skeleton staff, he’s forced to handle a deserted infant and a trio of missing girls almost single-handedly. Despite the overload, Jack has a sneaking suspicion that the baby and the abductions are somehow connected.

As he fights to reunite the girls with their families, the clues point to a dark secret that sends chills down his spine. Can Jack catch the criminals before the girls go missing forever?

If you like British crime dramas featuring ordinary people in extraordinary circumstances, then you’ll love these stories.