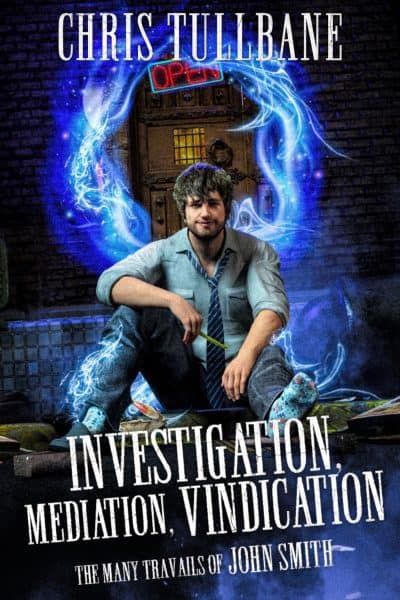 Investigation, Mediation, Vindication (The Many Travails of John Smith Book 1)

The stakes are real. The mediator isn’t. A vampire queen. An insane demigod. A magic Nintendo. When supernatural forces collide, it will take a skilled mediator to keep their conflict from destroying San Diego. Sadly, all they have is John Smith.

“Investigation, Mediation, Vindication.” That’s how the Yellow Pages ad starts, and if it sounds like the sort of thing a drunk teenager might come up with . . . well, you’d only be wrong about the teenager part. John Smith owns San Diego’s smallest private investigation firm, but he doesn’t know the first thing about mediation. Or vindication.

On the other side of town, vampire Lucia Borghesi is having a terrible century. Stripped of her throne and banished from Italy, she’s now somehow found herself in a dispute with the local demigod of nightmares and terror. And to top it all off, the long-time city mediator has been assassinated and her second-in-command just hired a human to fill that role.

If he wants to survive, John will need to prove his value to Lucia and her people while keeping that demigod from sucking San Diego into an unnamed hell dimension. And he’ll have to work fast, because his beloved Corolla is parked curbside in Logan Heights, like an open invitation to the neighborhood’s graffiti enthusiasts.

Come take a walk on the weird side of urban fantasy, in what Kirkus Reviews described as an “entertaining tale that’s sure to leave readers anticipating the protagonist’s next misadventure.”