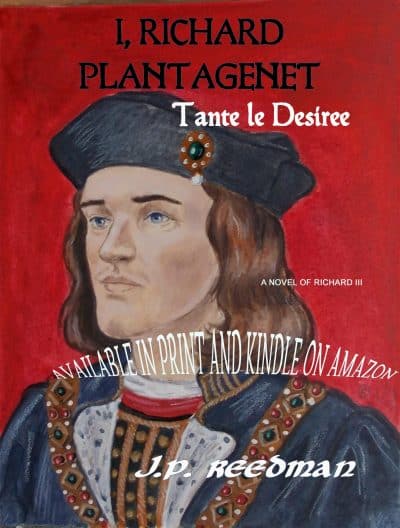 He is eighteen.I t is his first battle. He is wounded . . . he is Richard of Gloucester, the King’s youngest brother. With the Kingmaker slain, Richard and his brother Edward IV go on to ultimate victory at Tewkesbury.

The Old King Henry dies in “mysterious circumstances” in the Tower and York’s claim is secure . . . Richard wants to marry Anne Neville, the Kingmaker’s daughter, but his brother George stands in his way and hides her in a London tavern. Not all the feuds are on the battlefield for the House of York!

Finally finding his bride, Richard gets both the girl . . . and her lands! As Lord of the North, with Middleham castle as his main seat, he sets out to be York’s “especial good lord.”

He is Chief Mourner at the reburial of his father, Richard Duke or York, and fares with the King to France for what he hopes will be another Agincourt, a glorious victory for England. Instead, he finds a changed Edward—and the dishonour of French bribes.

The next few years bring grief when the perennially troubled George of Clarence goes mad and is executed by King Edward for treason. The Three Sons of York are no longer three, and Edward’s glorious Sun in Splendour seems to be setting.

With Edward’s health on the wane, it is Richard’s duty to take on the invading Scots alone and put the fickle Duke of Albany on the Scottish throne.