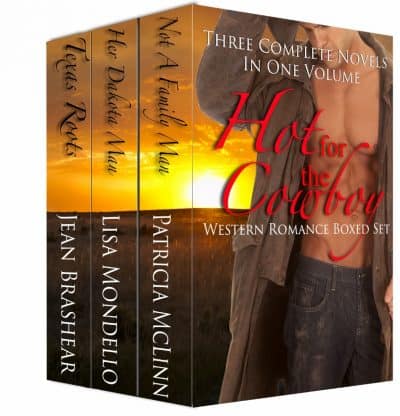 Hot for the Cowboy

Contemporary Western romance novels from three best-selling authors. Read about hardworking cowboys with these stories that tug at the heart strings. Some broken things only love can heal.

TEXAS ROOTS, by Jean Brashear
When scandal and an ambitious prosecutor wreck talented chef Scarlett Ross’s life and she learns of a grandmother she never knew she had, she flees the notoriety to pay an anonymous visit to Sweetgrass Springs, Texas, a town kept alive only by her grandmother’s determination and carried on the strong shoulders of sexy Texas cowboy Ian McLaren. There she is surprised to discover a yearning to sink roots deep in the Texas Hill Country—but she is terrified that the secrets she’s hiding will endanger everyone she’s come to love.

HER DAKOTA MAN, by Lisa Mondello
Poppy Erickson had spent the year wondering how all their lives might have been different after hearing the deathbed confession of her childhood friend. She’d left South Dakota years ago because she couldn’t bear to watch the man she loved loving another woman. But now she knows the truth. She’ll keep the promise she made to a friend, but will Logan understand when he learns the truth? More important, can they again recapture the passion that had been between them all those years ago?

Single dad Logan McKinnon had seen more than his share of bad times after the death of his wife a year ago. The last thing he needs is Poppy, an old flame and his late wife’s best friend, showing up unannounced to help after devastating floods nearly washed away their hometown. With no place to stay in town, he has no choice but to offer her a bed at his house. But can he live under the same roof with a woman he’d once loved passionately without feeling he’s betraying his late wife?

NOT A FAMILY MAN, by Patricia McLinn
To Wyoming ranch foreman Tucker Gates, the only good owner for the Double Bar X was an absentee one. That’s how it had been for ten years. And then came divorcee Jenny Peters. Bringing her two whining, spoiled kids and her city-bred fairy-tale views of life—and love—in the West. None of them belonged on a working ranch. Or in his life.

Jenny wasn’t going to let Tucker scare her away from the new life she wanted to build for herself and her kids. No matter that he could be as hard as the mountains around them. No matter that she found totally unexpected comfort from his rough strength.
But what next? Because Tucker Gates was a lot of things, but he was absolutely clear that he was not a family man.