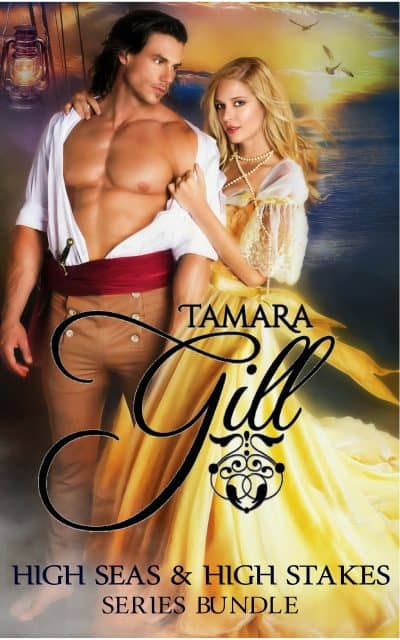 A two-book bundle of swoon-worthy historical romance: May Stanford is forced to go up against the Earl of Grandison, while Miss Arabella Hester is kidnapped by a handsome pirate!

His Lady Smuggler
After two failed seasons in town, May Stanford sees her future no longer with her family, but in a nearby convent where she’ll not be anyone’s financial burden. But before she can embark on her new life, May must complete her dealings with the local smugglers, men who have kept a roof over her family’s head during frugal times. One last Christmas at home and her life will change forever. So when William Scott, the Earl of Grandison arrives and crumbles her perfectly planned future to rubble, May is less than pleased.

William, Lord Grandison, works for the Crown, and is determined to catch the nuisance Englishmen who dare smuggle along the Cornwall coast. William has never veered from his pursuit of these men working against the law—that was until he meets May Stanford, the maddening daughter of his host for Christmas. May drives him to distraction and forces him to admit to feelings he has never felt before.

But when May and William discover the crippling truth of each other, their secrets will threaten to tear them apart.

Her Gentleman Pirate
Kidnapped by a smuggling pirate, Miss Arabella Hester is appalled by the circumstances that have befallen her. Imprisoned on a ship in the most scandalous of company, her reputation as a lady betrothed to a English Viscount is in tatters.

Captain Stephen Doherty, a.k.a. Blackmore, was left with little choice but to kidnap the daughter of Sir Ronald Hester, a man who’s payment for services rendered is long overdue. The ransom due on Arabella will settle her father’s debt, and allow Stephen to restore his family’s fortune.
​
Pursued across an ocean by those determined to restore a daughter to her rightful place, Arabella and Stephen navigate high seas and high emotions. But when their time is up, it remains to been seen whether this lady wishes to be caught by anyone other than her pirate . . .