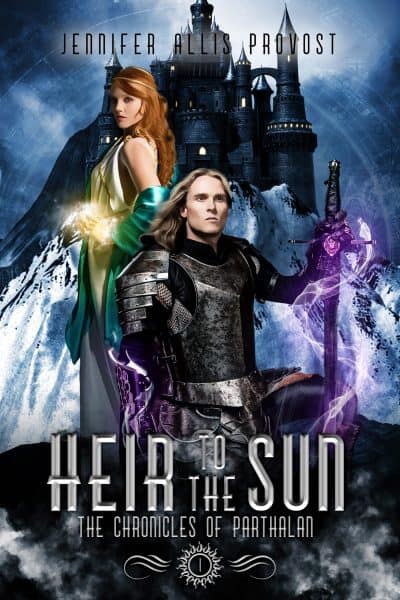 Heir to the Sun (The Chronicles of Parthalan Book 1)

A mad king. An escaped slave. One warrior to save the realm . . .

A mad king. An escaped slave. One warrior to save the realm . . .

Asherah doesn’t want much. A former slave, she wants to live out her days in peace and enjoy her hard-won freedom…then she learns that Parthalan’s king, Sahlgren, ordered not only her enslavement, but that of thousands more. Naturally, she starts a rebellion, but while she has a quick mind and a strong sword arm, she lacks both the funds and the soldiers to make her rebellion a success.

Enter Lormac, the elf king of the north. He’s quickly captivated by Asherah and agrees to fund her rebellion. What’s more, he wants to make Asherah his queen . . . but is that what Asherah wants?

Caol’nir was born to be a warrior, and he can’t think of a worse way to spend his life. He goes through the motions of his role as an elite temple guard—until Alluria arrives. She’s a priestess from the east, and Caol’nir can think of nothing but her bright eyes and soft voice—and the fact that he took an oath to defend the priestess’s chastity.

Rules never much bothered Caol’nir, and he searches for a way to be with Alluria. Then a priestess is attacked, and another is murdered, and Caol’nir realizes that Alluria isn’t safe in the temple. When Caol’nir learns that King Sahlgren himself is responsible for these atrocities, Caol’nir heads north and joins Asherah’s rebellion.

What Caol’nir doesn’t know is that Sahlgren has promised the demon lord a woman of rare and singular beauty, a woman whose magical abilities are rumored to rival the sun god’s . . . a woman Caol’nir knows all too well.