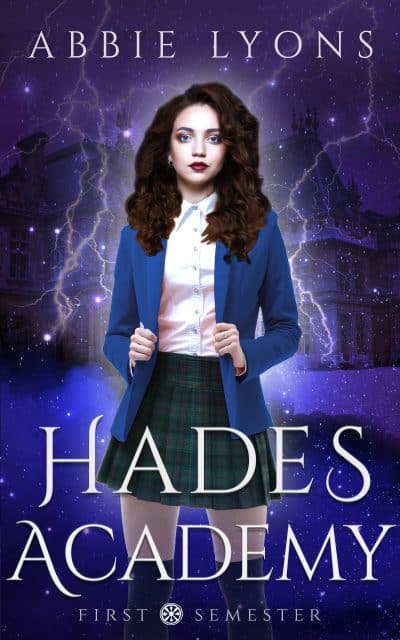 Busted running scams, Nova is shocked to find out she's headed to Hades Academy. But if learning ancient magic isn't enough, she has to face a mean girl who hates her half-human guts, some hot but dangerous dudes—oh, and whatever's trying to destroy the school.

I thought I could survive anything—until I met actual demons.

Ever since my mother disappeared, I’d been fending for myself on the streets of New York by running scams—anything to get a dollar.

So when I almost lightning-blast my latest victim (WTF), and some guy in a slick suit saves me from the cops by telling me I’m half-demon (double WTF) and I belong at a place literally called Hades Academy? I figured I was the one getting scammed.

My name is Nova Donovan, and I’m half-demon.

Next thing I know, I’m flying in a horse-drawn carriage on my way to a place I didn’t even know existed until twenty minutes before. Hades Academy is 100% real: a school for demons to learn the magic that will keep the forces of Chaos at bay.

But if I thought survival at Hades Academy was going to be any easier, I could not have been more wrong. Now I have to deal with tough new classes, a bitchy mean girl who hates my half-human guts, and the attention of several hot but dangerous dudes.

Oh, and did I mention that someone’s trying to destroy the school?

Yeah—survival’s going to take more than I thought.

Hades Academy: First Semester is a magic academy NA paranormal fantasy novel with a slow-burn romance and a kickass heroine. Although there are love triangles, this is NOT a reverse harem. Rated 18+ for strong language.