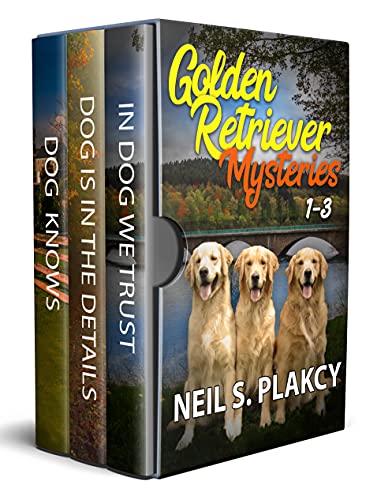 Can a dog really solve a mystery? Rochester can!

(1) Mild+
(1) Moderate
Click or tap each bar for details
Log in to submit or change your own rating.

These are the first three books in the charming, cozy Golden Retriever Mystery Series, set in picturesque Bucks County, PA.

In Dog We Trust
Steve Levitan has returned to his hometown of Stewart’s Crossing, after a bad divorce and a brief prison term for computer hacking. While he’s getting his life back together, trying to start a new career in technical writing and reporting regularly to his parole officer, he becomes friendly with his next-door neighbor, Caroline Kelly, and her golden retriever, Rochester. When Caroline is killed, Steve’s high-school pal, the local police detective, asks him to become the dog’s temporary guardian. With canine charm and doggy love, Rochester begins to win Steve over, and these two unlikely sleuths work to uncover the mystery behind Caroline’s death.

The Kingdom of Dog
When his mentor, Joe Dagorian, director of admissions at prestigious Eastern College, is murdered during a fund-raising event, Steve Levitan feels obliged to investigate. He and his golden retriever, Rochester, go nose to the ground to dig up clues, including a bloody knife and some curious photographs. But will Steve’s curiosity and Rochester’s savvy save them when the killer comes calling?

Dog Helps Those
It’s almost time for graduation in book three, and Eastern College is in trouble. A prominent alumna is dead, and a faulty computer program is jeopardizing student records and financial aid. It’s up to Steve and Rochester to dig into the situation and retrieve the culprits! Rita Gaines wasn’t a nice person—but she did love her dogs, and most of her clients respected her financial acumen and her talent in training dogs for agility trials. When she’s found dead, there’s a long line of potential suspects from Wall Street whiz kids to doting doggie daddies—including one of Steve’s former students.

Felae is an art prodigy now studying with Steve’s girlfriend, Lili, chair of Eastern’s Fine Arts department, and Rita hated his controversial senior project. When she tried to have his scholarship cancelled, he threatened to kill her. But is he the villain behind her death? In between helping Steve’s high school friend Rick track the killer, Rochester practices darting around weave poles and jumping over limbo poles while Steve helps shepherd the college toward the completion of another academic year. It’s spring in Stewart’s Crossing, and old friends—and their dogs—gather together to investigate and eventually, to celebrate.