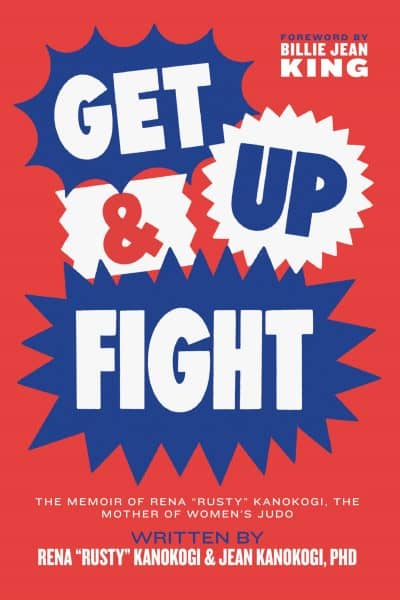 Get Up & Fight: The Memoir of Rena “Rusty” Kanokogi, The Mother of Women’s Judo

In 1959 Rusty was stripped of her first-place judo medal for being a woman. She battled the next fifty years—and made it all the way to the Olympics.

“Rusty has that special quality that made you feel like you could fly . . . that you could do anything, because she was right there with you.” —Billie Jean King, Tennis Champion & Advocate

In 1959 Rusty’s well-earned first place medal was ripped away from her because she was a woman. She fought in a judo championship against a man and won, but when the judges discovered her gender, they stripped her of her title. Women were not allowed. From that point on, Rusty had a new goal: to ensure that no woman would ever suffer such an indignity ever again! This vow sparked a fifty-year career fighting for equality—a tireless battle she would take all the way to the Olympics.

In her uniquely raw, unfiltered, humorous voice, Rusty recounts the tales of her remarkable life and journey from the rough streets of Coney Island, Brooklyn, to the offices of the political, powerful and persuasive, where she established herself as a major force in the world of women’s rights and the sport of judo, securing women’s inclusion on the international stage. Rusty’s memoir is a love story filled with passion and righteousness—for her sport, her family, and her way of life as a judoka.

Often called a pioneer, Rusty was an unsung hero in the fight to give women voice and agency, in life and in sports. She did not see human limitations, only possibilities. The establishment told her “no,” but “no” was not a part of her vocabulary. Instead, Rusty fought like hell, and won.

In her own words, Rusty decided to “be the hammer,” not the nail.