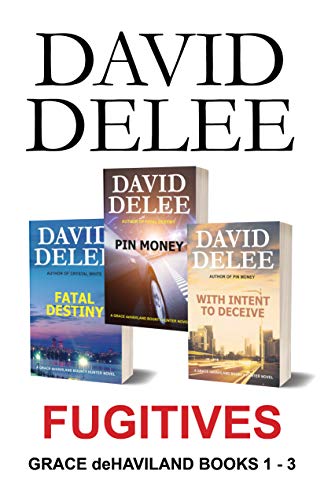 Fatal Destiny
For bounty hunter Grace deHaviland, the job seemed simple. Track down Barry Keegan, a white-collar defendant in a corporate embezzlement scandal who jumped bail. A bean counter. How hard could that be?

Drawn into a web of deception involving stolen mob money, old scores, and ruthless hit men, Grace must track down the elusive Keegan—a man who is more dangerous than anyone could have guessed—while she tries to protect his wife and son from a past they thought long dead and buried.

Pin Money
Drawn into a complex, joint task force investigation, Grace deHaviland, along with her best friend Sheriff’s Deputy Suzie Jensen, find themselves facing off against gunrunners, the U.S. Marshal Service, and the ATF. Squeezed from all sides, they must do what the feds, and even Grace’s occasional lover, BCI Agent Eugene Booker, won’t, if they are to find their man before time runs out . . . for him and for them.

On the trail of a pedophile and out of time before more victims die, Sheriff’s Deputy Suzie Jensen turns to the only person she knows who can help her locate her perp and a missing girl: the top bounty hunter in Columbus, Ohio’s, Grace deHaviland.

Hired to track down and bring in a call girl on the run, bounty hunter Grace deHaviland soon discovers there’s more to the case than her skip’s odd decision to jump bail, forcing Grace to confront more than one old enemy, and ultimately face the most dangerous adversary of her career—for the second time!

Pitted against her best friend in a race against time and with a deadly street gang out for blood, can Grace unravel the mystery of Rhona’s husband’s death and track down the woman in time to stop more murders—namely Suzie Jensen’s and her own?