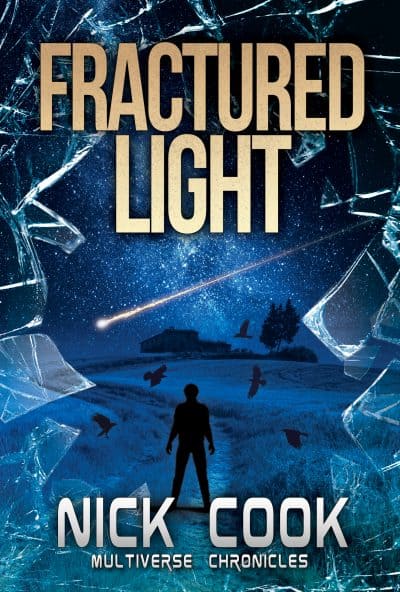 No one even realized the invasion had already begun. Now our world is about to be ripped apart by a threat from beyond our reality.

What would you do if you started to see something lurking in the shadows?

That’s the alternative world that Jake Stevens has been pitched into and now he’s questioning his sanity.

Jake’s been an outsider in his hometown Stoneham, England, ever since his life was shattered when his father’s experiment into dark energy exploded, killing himself and many others.

When Jake witnesses a satellite crash-landing, and starts to receive garbled messages that hint at a conspiracy, a chain of events is unleashed that will threaten the very existence of all life on Earth in a dystopian nightmare.

Can Jake and the best friend that he froze out of his life, Chloe Haze, a coding genius who’s heavily entrenched with the underground hacking network, figure out the connections of the mystery that link all the events before it’s too late?

Fractured Light is the first volume in the Fractured Light trilogy, and is also part of the Multiverse Chronicles, an epic series of interlinked stories that follows the struggle of humanity to survive across parallel universes.

If you love books by Michael Grant and Robert J. Crane or adore series like Stranger Things and Fringe, then this page-turning, smart sci-fi thriller is for you.

What Amazon Readers Are Saying

★★★★★ “A real page turner that’s once started is difficult to put down.”

★★★★★ “Thrilling, intelligent, and deeply intriguing, I positively raced through it.”

★★★★★ “Ordinary lives are found to be caught up in an extraordinary situation which could be reflected in our future advancements of technology/sciences.”

★★★★★ “Nick Cook’s brilliant first installment of his Multiverse Chronicles trilogy is a fast-paced fantasy/science fiction novel that takes its place in the lineage of which it’s part, the works of Ursula Le Guin, JRR Tolkien and Phillip Pullman.”

★★★★★ “Very creative ideas, asking interesting questions that made me wonder… – with just the right amount of sci-fi, tech and action thrown in. Thank you, can’t wait for part two now!”

Author Note: For my friends across the Pond please note this book is written in UK English and uses single quotes rather than double ones. Yes, Brits are weird like that!