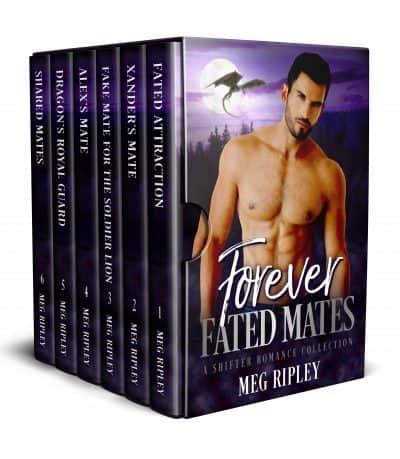 Indulge in this collection of six sizzling fated mate romances! If you love powerful, protective alpha shifters who risk it all for their strong, sassy soulmates, Forever Fated Mates will set your heart ablaze for hours on end.

Fated Attraction
A sexy bear shifter with a surfer attitude collides with a sassy, badass panther. They can’t be more different. But when the undeniable passion between these rivals blazes out of control, they can only fight fate for so long.

Xander’s Mate
A single dad dragon knows that Summer belongs to him, but the free-spirited witch can’t fathom how things could ever work between them. But if two souls are truly destined to be together, can they overcome their differences enough to realize a love that knows no bounds?

Fake Mate for the Soldier Lion
Hudson and Leona will be posing as mates on a covert mission. The only problem? Each immediately recognizes the other as their one true match. And dating within the Force is strictly forbidden. Will honor and duty keep these big cats from realizing what’s written in the stars for them?

Alex’s Mate
After her ex took off with her best friend, Roxy’s done with men. So why does her inner wolf practically go into heat whenever a certain ruggedly handsome bear shifter is near?

Dragon’s Royal Guard
A portal ripped open, thrusting Archard into a strange new world. He must return to his guard post at once, but after finding his mate on Earth, he must choose between honoring his kingdom and his inner dragon’s fated destiny.

Shared Mates
No one thought a shared mate bond was possible. But the intense feelings both Max and Carson have for River—and the ones she has for them in return—have them thinking otherwise. How will these two competitive bears ever get along well enough to share a mate as they’re destined to?

Steamy shifter love scenes and HEAs inside! No cheating or cliffhangers in these standalone stories. Readers 18+.