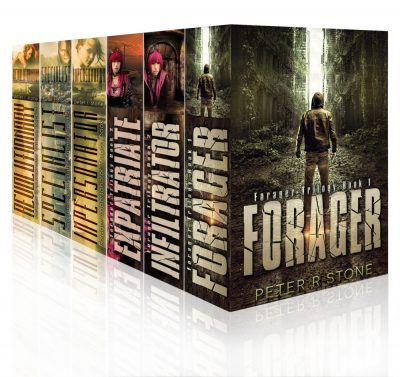 Ethan Jones lives in a post apocalyptic, oppressive society that terminates anyone with radiation-caused mutations. For that reason, he lives in constant fear, for he has an incredible mutation that gives him an edge over the vile Skel savages who roam the ruins.

Twenty-year-old Ethan Jones lives in a post apocalyptic, oppressive society that terminates anyone with mutations caused by nuclear radiation in an effort to keep the human race pure.

His life becomes complicated when he rescues a mysterious Japanese girl from the Skel and brings her back with him, for she breaks the town’s rigid conventions in her pursuit of him, placing their lives in jeopardy. Her odd behaviour and probing questions baffle him, as does the fact that he understands her when she speaks in Japanese.

At the same time, the Skel ramp up their attacks on the foraging teams. Is this part of a larger plan that could spell the town’s doom? And why do the Skel suddenly possess advanced technology—who is backing them, and why?

Keeping his mutation secret, uncovering the girl’s true intentions, and trying to save the town all vie for Ethan’s attention. And if he fails, not only his life, but the lives of all, are at stake.

Eighteen-year-old Chelsea Thomas has spent her life living in fear of Newhome’s paramilitary Custodians, due to a prohibited rogue ability.

In the past week, her twin brother—a forager—has uncharacteristically run away from home and work after the mysterious death of a teammate. Something has also scared her normally unflappable father half to death, and their family is threatened with eviction.

However, her brother’s disappearance presents her with a long-sought after opportunity to escape Newhome, since only the foragers—all menare allowed to leave the town. All she has to do is impersonate her brother long enough to make her escape while foraging out in the ruins.

But she never counted on the kindness of Ryan Hill, a forager new to the team. Nor did she expect the barbaric Skel to attack the team the moment she decided to run away. She has to choose between making good on her escape or saving Ryan and the others.