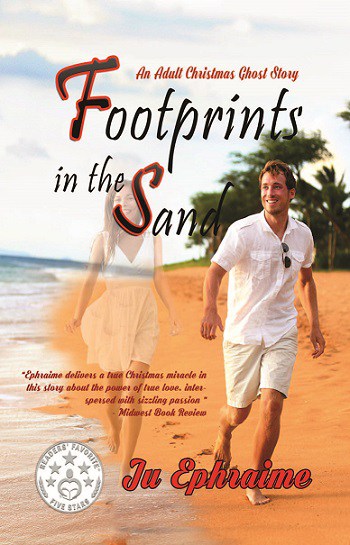 Footsteps In The Sand

Several years ago, James Lorde lost his wife in a boating accident; ever since, he has haunted the beach. This Christmas the ghost is haunting him.

One Christmas Eve, five years ago, James Lorde lost the love of his life in a freak drowning accident. His wife’s body was never recovered, and since that night, he’s been depressed, both grieving and clinging to the hope that she lives.

It’s Christmas Eve, and the depression is especially hard this time of year. He gets only a small measure of relief when he’s near the water that stole her away from him because, somehow, he feels her presence on the beach. His family thinks he’s losing his mind when he tells them he feels her out there, but that is the reason he bought the home where he currently resides. He wants to give her a way home.

On this Christmas day, it feels as if his wife is in the home with him. In a fit of desperation, unable to remain in the house, he takes off running toward the beach. As he starts to run, he feels someone running alongside him, but there is no one there when he looks. Thinking he has definitely gone over the edge, he begins running backward, hoping to catch evidence of whomever is following him. And there they were, two footsteps next to his in the sand. He is so shocked by this that he keeps running, looking for the footsteps, but before he can focus on them, the waves wash them away. Running backward, he trips over an obstacle in his path. Turning around, he is not prepared for the sight that greets him, as he is now left to wonder, can even loved ones find their way home at Christmas?